Page: How the Lions and Bears Carved Out a Thanksgiving Day Tradition for the NFL 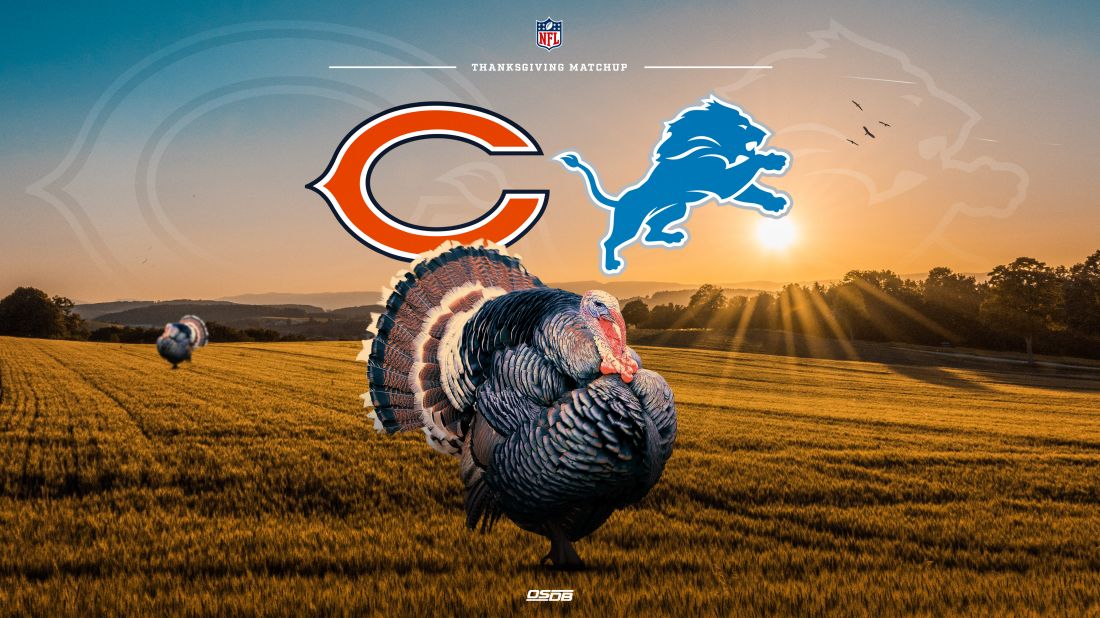 Thanksgiving is a holiday centered around showing gratitude and appreciating what one has in this life.

Images of smiling pilgrims come to mind, celebrating amidst a cornucopia of indulgent foods. Roast turkey (or perhaps Tofurky, if you don’t dig on meat), creamy mashed potatoes, and herb-crusted stuffing, all drenched in a rich mushroom gravy. The sweet puckery tartness of cranberry sauce on the side, and a decadent slice of pumpkin pie for dessert.

For most sports fans in the United States, it goes a step further. The smell and the taste of Thanksgiving dinner is forever intertwined with the adrenaline and excitement of brisk autumn gridiron action.

Rosy-cheeked families, often stuffed to the gills, toss around pigskins in the backyard before televised kickoffs. Football has been connected with Thanksgiving for a great many years. The tradition technically began on Nov. 30, 1876, when Princeton lost to Yale 2-0 in front of a small Hoboken, NJ, crowd.

This marked the first collegiate football game played on Thanksgiving Day, but it was the pros that really cemented this late-November ritual in sweet potato casserole in Detroit, 1934.

George A. Richards had acquired the Portsmouth Spartans earlier in the year and moved them from Ohio to Detroit.

Richards used his connections as a radio executive to make some marketing noise and put his new team on the map, brokering a deal with NBC Radio Network to broadcast a Thanksgiving Day game between his freshly minted Detroit Lions (10-1) and the undefeated Chicago Bears (11-0).

Legendary Bears owner and coach, George Halas, was not someone to miss a chance for his team to perform in the national spotlight. Halas’ Bears had won the league championship in back-to-back seasons, and appeared to be biting and clawing their way towards a three-peat.

Approximately 26,000 fans turned out to witness an epic battle between pro football powerhouses. The cheering throng at the University of Detroit Stadium would not be disappointed. The Lions led the Bears 16-7 at the half, but Chicago stormed back to score 12 unanswered second-half points on the strength of future Hall of Famer Bronko Nagurski’s arm and kicker Jack Manders’ leg. The Bears won 19-16 to remain undefeated, thus immortalizing the NFL’s first national radio broadcast. This epic clash of the titans set a precedent, and gridiron glory became a fixture of Thanksgiving festivities going forward.

The Lions have played host to a Thanksgiving Day game every season since their inaugural battle with the Bears on Nov. 29, 1934, the only exception being the lost years during World War II (1939-1944).

The Lions have an overall record of 37-42-2 on Thanksgiving, and are 8-10 against Da Bears. Detroit took three of the first five head-to-head gobbler games with Chicago, before losing five in a row. The Lions finally got back in the Thanksgiving win column vs the Bears in 1979, which set the stage for an epic overtime thriller in November the following season. Detroit wanted seconds.

The Lions led 17-3 in the fourth quarter, but that’s when Bears QB Vince Evans took over the game. Evans first connected on a 20-yard touchdown pass to Bob Fischer, and shortly thereafter tied up the game at 17 with a four-yard TD scamper.

Chicago’s Dave Williams would take the opening overtime kickoff to the house for a touchdown, capping off the dramatic comeback victory. Bears 23, Lions 17.

However, the most memorable game for this author came in 1997, when a pint-sized dynamo named Barry Sanders wore the silver and Honolulu blue.

Sanders dipped, deked, and accelerated through pinprick holes with exquisite skill, bouncing off defenders and seeming to be covered in some sort of magical dust. The electric Hall of Fame running back tore the Bears defense to ribbons, rushing for 167 yards on 19 carries and scoring three TDs.

None of Sanders' scores came from less than 15 yards. Sanders’ prowess on the ground during this contest catapulted him past Eric Dickerson into second place on the all-time rushing list. The Lions trounced the Bears 55-20, en route to a 9-7 record and a playoff spot.

Chicago visited Detroit in late November again in 1999, and the Lions were able to squeak out a 21-17 victory (despite Sanders’ mind-blowing retirement).

It would be another 15 years before the Bears and Lions squared off again on Thanksgiving.

In 2014, it was Detroit QB Matthew Stafford and recently enshrined Hall of Fame WR Calvin Johnson who spearheaded Chicago’s destruction.

“Megatron” caught 11 passes from Stafford for 146 yards and two TDs. Stafford threw for a total of 390 yards, leading the Lions to a 34-17 victory over the Bears. Detroit has not beaten Chicago on Thanksgiving Day since.

In 2018, Lions’ RB LeGarrette Blount rumbled for 88 yards and two scores on 19 carries, but it wasn’t enough to overcome Stafford’s two costly interceptions. Bears QB Chase Daniel effectively game managed his way toward a 23-16 victory over the Lions.

The following year Stafford was out with multiple fractures in his back, but Detroit fought hard. Backup QB David Blough logged 280 passing yards and two TDs, connecting with WR Kenny Golladay four times for 158 yards and a score.

However, it would be Bears QB Mitch Trubisky who would steal the show. Trubisky connected on 29-of-38 passes for 338 yards, throwing three TDs while leading Chicago to a 24-20 win at Detroit. WRs Anthony Miller and Allen Robinson II combined to haul in 17 balls for 226 yards and one end zone celebration.

This coming Thursday, the Bears visit the Lions to break bread once again. Detroit (0-9-1) is still looking for its first win of the 2021 season, and so is QB Jared Goff. It’s been a tough stretch for Goff, who has struggled since joining the Lions.

Goff is officially listed as questionable (oblique), and it’s quite possible we’ll see Tim Boyle at the helm.

Chicago (3-7) is dealing with injuries at the quarterback position as well, and potential franchise QB Justin Fields (ribs) has not practiced and is doubtful to play on Thanksgiving. Veteran ginger gunslinger Andy Dalton is waiting in the wings if Fields can’t make the start for Chicago.

Chicago has lost five games in a row, but the last two losses were suffered by a total of just five points. Recently signed LB Cassius Marsh has given Chicago a spark on defense, and it’s certainly possible that the Bears can make a late-season run at the postseason.

The upcoming Thanksgiving Day throwdown in Detroit is an absolute must-win for Chicago. There are reports circulating that this may be Matt Nagy’s last game as head coach of the Bears, and that his firing is imminent. These reports have not yet been substantiated, so at the moment the Bears playoff hopes are still intact and so is Nagy.

Hope is one of the greatest things you can be thankful for.