By Holly Cain | Posted 17 days ago 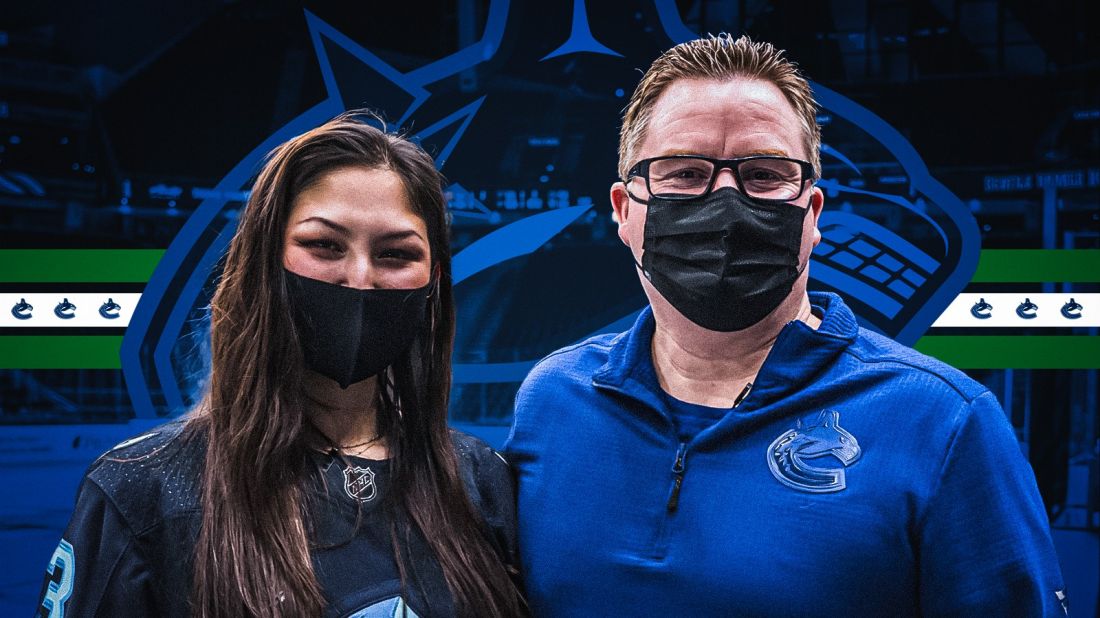 As random as it may have been, a chance interaction between a hockey fan and the visiting team staff turned out to be an ultimate lifesaver. The happy ending to this story is the truest of sports’ win-wins. The perfect way to start the New Year.

In October, Vancouver Canucks’ longtime equipment manager Brian “Red” Hamilton was working on the bench as the team played the National Hockey League’s expansion team in the Seattle Kraken’s first home game. A fan in the stands behind the Vancouver bench, 22-year-old Nadia Popovici, noticed a concerning spot visible on Hamilton’s neck as he worked in the bench area.

The aspiring medical student felt a call to action and despite all the action of the game, tried to get his attention from the stands. Ultimately, she wrote a message to Hamilton on her cellphone, suggesting he have the spot looked at by a medical professional. She held her phone up to the glass around the team bench hoping Hamilton would read it.

He did. And it may have saved his life. He had the team doctors give the spot a once-over. Ultimately, it was diagnosed as a malignant melanoma and promptly removed.

“She extended my life,” Hamilton said in a Zoom press conference on Saturday afternoon. “I’ve got a wonderful family, I’ve got a wonderful daughter and I just think like, she extended my life. She didn’t take me out of a burning car like the big stories but she took me out of a slow fire, and then words out of the doctor’s mouth where if I ignored that for four to five years, I wouldn’t be here.”

Hamilton was obviously immensely grateful for Popvici’s persistence and care. But the problem was, he had no idea who this hockey fan in a visiting arena was. She had only gotten his attention and held up a message on a cell phone.

“When I went back out on the bench (Saturday) I felt a little emotional and looking at the glass and trying to figure out exactly where she was on the glass.”

So, Hamilton put social media to its best use, writing a message of his own and distributing it through the Canucks’ huge fanbase.

#HockeyTwitter, we need your help!

Please RT to spread the word and help us connect Red with the woman he considers his hero. pic.twitter.com/HlZybgOnjf

“I am trying to find a very special person and I need the hockey community’s help,’’ Hamilton’s post began. “To this woman I am trying to find, you changed my life and now I want to find you to say THANK YOU VERY MUCH!”

“That evening Oct. 23rd and the message you showed me on your cell phone will forever be etched into my brain and has made a true life-changing difference for me and my family,’’ Hamilton continued. “Your instincts were right and that mole on the back of my neck was a malignant melanoma and thanks to your persistence and the quick work of our doctors, it is now gone.’’

The social media outreach worked and Popovici was identified. At their game on New Year’s Day, the teams made sure Hamilton and Popovici got to meet in person. The gratitude between the two was unmistakable and it was hard to tell who was feeling better about the outcome of their interaction.

"The reason for the letter (today) was that I really wanted her to know her persistence and everything she did to get my attention, she saved my life." -Brian (Red) Hamilton pic.twitter.com/XQO2ZsEAtA

They joked about the onslaught of text messages and feel-goods they both have received. Hamilton shared that his mother and his sister were grateful for Popovici’s intervention, insisting his family – girlfriend and daughter too - “love” Popovici.

Hamilton conceded he didn’t initially think much of Popovici’s message when first seeing it, but said he woke up the next morning and felt like he “owed” it to the fan to at least get the spot checked.

It was a life-changer for Hamilton and a real-time reminder for the rest of us, of the power that can come from random compassion.

In so many ways, it was the perfect lesson of kindness to start 2022 off in all the right ways.

As an additional gesture of goodwill, Popovici was introduced at the Jan. 1 game, where it was announced that the Seattle and Vancouver hockey clubs had come together to offer her $10,000 as she begins her medical studies this summer.

Together with the @SeattleKraken, we awarded Nadia Popovici a $10,000 scholarship for medical school as a show of our appreciation 👏 pic.twitter.com/VgK8aMgJTA

One life saved and many others impacted, by the simple power of goodwill.

Nadia Popovici honored on the Kraken video board where they also announced the Kraken and Canucks would be giving her $10,000 for her college tuition pic.twitter.com/DuRAj93Bfo