Page: ‘Hard Knocks’ by the numbers: History not on Cowboys’ side

‘Hard Knocks’ by the numbers: History not on Cowboys’ side

By Cameron DaSilva | Posted 5 months ago 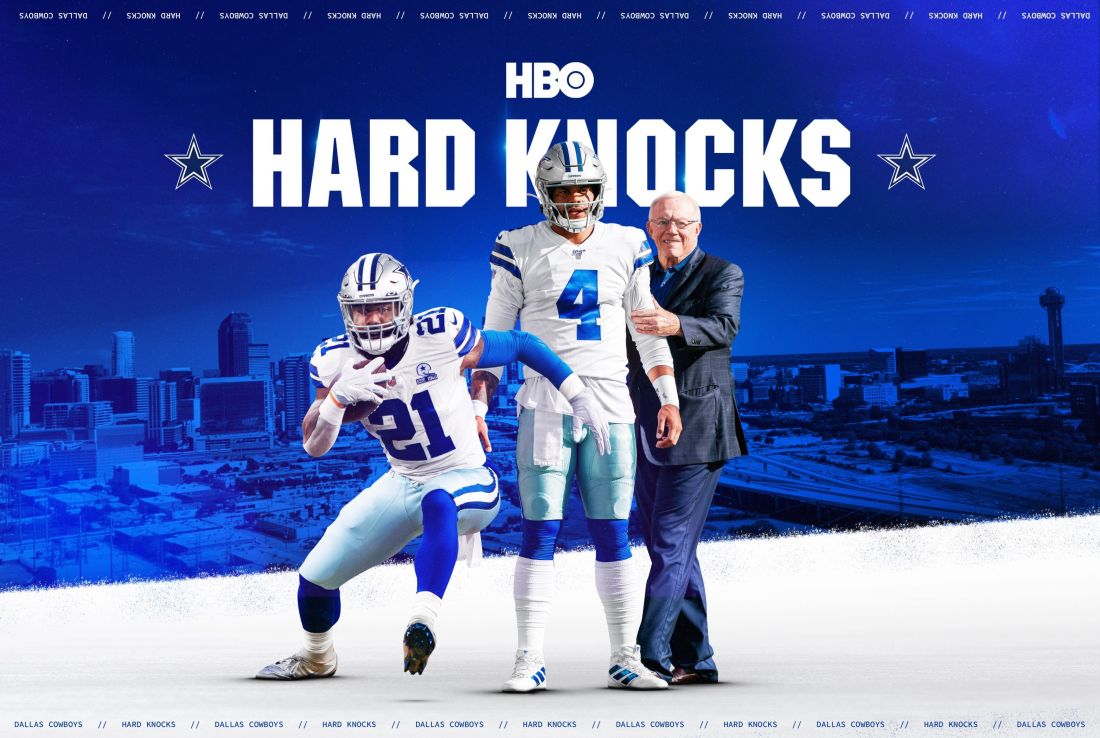 Whether the Dallas Cowboys go 0-17, 17-0 or something in between this year, they’re guaranteed to make history – sort of. The Cowboys will be the first team to appear on HBO’s series “Hard Knocks” three times after Dallas was selected to be featured on the hit show this summer.

As fun as it will be for fans to watch Dak Prescott return from a gruesome ankle injury, Mike McCarthy lead Dallas in his second season and CeeDee Lamb hopefully blossom into a star receiver, teams that have been on “Hard Knocks” in the past have not fared all that well.

The Rams bucked that trend last year by going 10-6 and making the playoffs, and beating the Seahawks with a shorthanded starting lineup in the Wild-Card round of the postseason – a game that was played in Seattle, nonetheless. But their co-stars on the show, the Los Angeles Chargers, went 7-9 and missed the playoffs … again.

The Rams became the sixth team to make the playoffs in the season they were on “Hard Knocks,” and third to win a postseason game. No team has made the Super Bowl the year it was on the show.

With their Super Bowl odds sitting at +4000 (15th-best in the NFL), Dallas is already a longshot to reach the big game. Being under the microscope in training camp and the preseason probably won’t help.

Here’s a look at how the last 16 teams have performed in the season they were on “Hard Knocks,” as well as their record the year prior.

With a relatively large sample size, let’s go by the numbers of “Hard Knocks” history and uncover some interesting (and important) trends from years past.

1 team made the conference championship

Of all the teams that have been on “Hard Knocks,” one team won multiple playoff games. The 2010 New York Jets, led by Rex Ryan and Mark Sanchez. New York went 11-5, finished second in the AFC East and made a run to the AFC Championship Game after beating the Colts and Patriots in the first two rounds of the playoffs. HBO asked the Jets to return to the show in 2011, but they understandably declined – as did their record, going 8-8 that year.

Believe it or not, but only two of the 16 teams in “Hard Knocks” history have won their division: the Bengals in 2009, and the Bengals again in 2013. Of course, they never won a playoff game under Marvin Lewis, so they didn’t escape the Wild-Card round in either year, but at least they can say they were the only team in the show’s history to win their division. The Rams came close last year, as did the Ravens in 2001, but neither won their respective divisions.

In the first season of “Hard Knocks,” the Ravens were coming off a Super Bowl win over the Giants and had high expectations for the 2001 season. Unfortunately, Jamal Lewis suffered a season-ending injury in camp and sunk Baltimore’s Super Bowl hopes. The Ravens still won a playoff game that year, but their run ended in the divisional round.

The 2020 Rams and 2010 Jets are the only other teams that won a playoff game in the season they were on “Hard Knocks.” This January, the Rams beat the Seahawks in the Wild-Card round on the road before losing to the Packers the following week.

With HBO and NFL Films targeting teams that typically didn’t have success the year prior, coaches were often on the hot seat while appearing on the show. That has led to a handful of firings either during the season or immediately after.

In 2002, the Cowboys moved on from head coach Dave Campo in favor of Bill Parcells, who took over in 2003. Campo had three straight years with 5-11 records, so his firing wasn’t a huge surprise.

The Falcons fired Mike Smith after the 2014 season with Atlanta finishing 6-10, its second straight losing season.

The Rams moved on from Jeff Fisher toward the end of the 2016 season after he failed to finish a single year with a winning record, which opened the door for Sean McVay to come in as the head coach in 2017.

And finally, the Browns cut ties with Hue Jackson in October of the 2018 season after the team got off to a 2-5-1 start.

Plenty of teams have struggled in the season they appeared on “Hard Knocks.” Of the 16, five failed to win more than six games, with the 2016 Rams and ‘07 Chiefs tying for the worst record in the show’s history at 4-12.

6 teams made the playoffs

Last season, the Rams became the sixth team to make the playoffs while appearing on “Hard Knocks.” They snapped a four-year streak of “Hard Knocks” teams missing the playoffs after there was actually a good stretch of performances from 2009-2015.

The first team to make the postseason while on “Hard Knocks” was Baltimore in 2001.

7 teams had a winning record

Cowboys fans might be pleasantly surprised to find out nearly half the teams to appear on the show finished with a winning record. Those teams were as follows:

No team has finished better than 11-5 after appearing on “Hard Knocks,” but there have been some quality teams that performed well after having the cameras around during training camp.

8 teams were selected after finishing above .500 the year prior

Beginning in 2014, if a team made the playoffs in the previous two years, had a first-year head coach or appeared on the show in the last 10 years, it was able to decline being on “Hard Knocks.” So, most of the best teams in the NFL have opted not to be featured on the series, which is understandable.

It’s primarily why the Patriots, Packers and Steelers have never appeared.

But HBO was still able to lure eight teams with a winning record the year prior to appear on the show. The Ravens, Chiefs, Cowboys, Jets, Bengals, Texans, Buccaneers and Rams were all selected to be on “Hard Knocks” one year after finishing above .500, so they weren’t afraid of what the spotlight might do to them after a successful season.

9 teams had an improved record

The Cowboys went 6-10 last year, their worst record since 2015 when they finished 4-12. It was a difficult season without Prescott for most of the year, as well as a number of offensive linemen going down with injuries.

Improving upon that unimpressive record is one goal for Dallas, but McCarthy wants to do more than just go 7-10 or 8-9.