By Steve Tsilimos | Posted 7 days ago 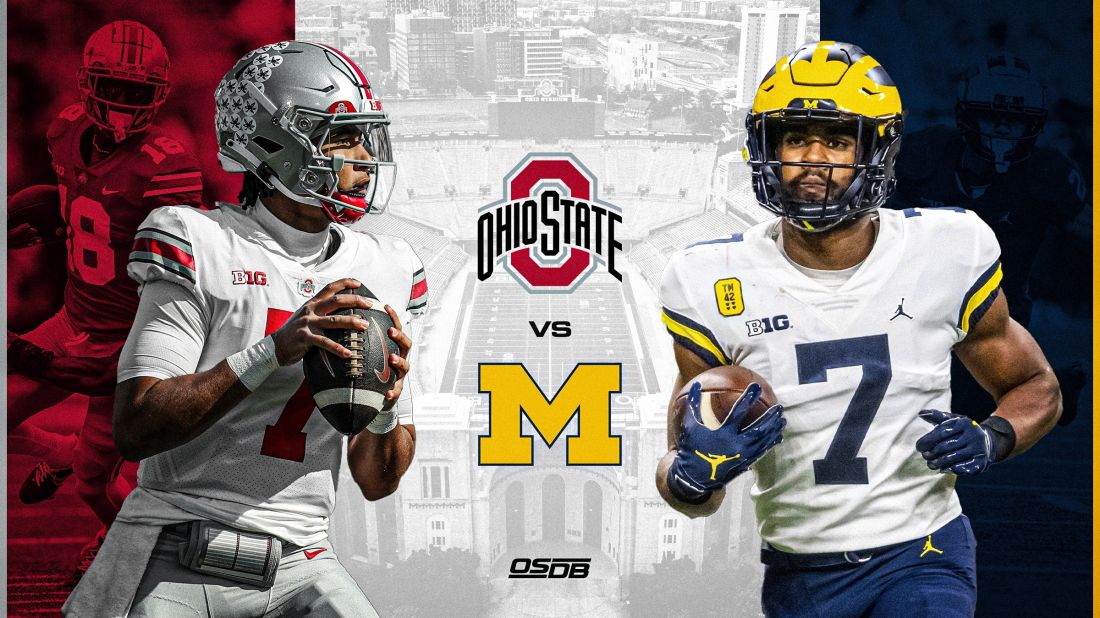 On November 26, 2022, No. 2 Ohio State and No. 3 Michigan will meet in Columbus for their annual gridiron clash. Both teams are entering the game undefeated for the first time since 2006. Being perfect up to this point adds extra pressure and national attention, but the two programs have known all along their records at this point will be meaniningless and the outcome of this game will determine how successful their season will be.

The Ohio State Buckeyes have been one of the betting favorites all season to win the National Championship. Coach Ryan Day and the Buckeye faithful all expected to be 11-0 and knew they would need to beat Michigan to regain the Big Ten title and get into the College Football Playoffs. Ohio State lost this game last year but has won 17 of the last 20 meetings.

Coach Jim Harbaugh and the Michigan Wolverines also entered this season with high aspirations. Last season’s 12-2 record ended an 18 year conference-title drought and was the schools best record since 1997 – when they went 12-0 and won the National Championship. Michigan’s historic 2021 season was only made possible because they were able to run over the Buckeyes 42-27 in Ann Arbor – ending their eight-game losing streak to their hated rival.

Both Ohio State and Michigan are coming off of surprisingly close conference victories last week. It wouldn’t surprise me if the coaches were taking a page out of Woody Hayes books and using extra time to prepare for “The Game.” Honestly, it wouldn’t be the worst idea as a coach of one of these teams, because your job is mainly judged on this one game.

Rivalries are always more fun when both teams are good like this year's version of Ohio State-Michigan. But in this rivalry, even if one team is down, there is still great motivation to win “The Game” and ruin the other team's chances at a title. There is no better rivalry in sports than the one between the Ohio State Buckeyes and Michigan Wolverines so let’s look at why.

What Makes a Great Rivalry?

Rivalries are like a nice bottle of rum – they take time and are complex while being well balanced. The tension between the competitors must build and the history must not be forgotten. Also, a good rivalry is built upon respect for your opponent, not hatred.

Other key measurable factors in a great rivalry iscompetitiveness, geographic location, impact on the league and strength of fan base. Those factors mixed with some polarizing characters and memorable moments all set the stage for a great rivalry.

The Ohio State-Michigan rivalry is special for many reasons that we will get to later. But first we can just look at the sheer number of people who’s entire year is defined by the outcome of a regular season football game in November. Then, we consider that it’s practically been this way since the teams first met 125 years ago. What we are left with is that year-after-year “The Game” continually has a huge impact on countless amounts of people from Ohio and Michigan, and quite frankly the whole nation.

So how did Ohio State-Michigan get to be such an important rivalry in sports?

Many sports rivalries start because of proximity to one another (Yankees-Red Sox), but few are rooted in a border disagreement that lasted over 100 years. The football rivalry between Ohio and Michigan began on October 16, 1897 – sixty years after the 1835 land dispute that turned violent, known as the War of Toledo.

The dispute went on for decades and the border was not officially defined until President Woodrow Wilson ordered the border surveyed in 1915. Even after it was firmly set, the two states continued to argue about the border – adding to the heated rivalry between the states’ biggest universities. In 1978 the two states went before the Supreme Court to argue over their competing claims to the waters of Lake Erie. The court sided with Ohio, and the border has remained unchanged.

The other factor that makes a good rivalry is that the series is competitive between the two teams. Many instate rivalriest take on the “big brother vs. little brother” complex because one team has historically dominated the other. Although Michigan dominated early on, the series between these two schools is very close (Michigan leads, 59–51–6).

By the time the two schools played in their first Big Ten Conference matchup in 1918, Michigan had already held a 12-0-2 record over Ohio State. Michigan’s dominance continued for decades; by 1950, the Wolverines had a 30-12-4 record over the Buckeyes.

As players came and went, many coaches of the two programs became the main characters in the storied rivalry. In 1951, Woody Hayes took over the Buckeyes' head coaching job and helped the Buckeyes make up some ground in the series. Hayes’ led the Buckeyes to three consensus National Championships (1954, 1957, and 1968) and two non-consensus nation titles (1961 and 1970). Hayes's 16-11 record against Michigan was a big part of why he was able to lead Ohio State to those titles.

Hayes’ rivalry with one of his former players/assistant coaches, Bo Schembechler, who took the Michigan head coaching job in 1968, is remembered as the “Ten Year War.”  The "Ten Year War '' elevated the already storied Michigan–Ohio State football rivalry into one of college football's greatest annual spectacles. The ten years before Hayes retired, the two programs dominated the Big Ten, splitting ten conference titles between them and finishing second eight times – earning the conference the nickname “Big Two, Little Eight.” Hayes held the record for most Big Ten titles with 13 when he retired, which was later tied by his friend/foe Bo Schembechler.

During the “Ten Year War,” Michigan and Ohio State were two of the best teams in the nation, which was why the whole country was interested in the outcome of “The Game.” Mix that with the old history and the rivalry between the two coaches, and all-of-the-sudden the greatest rivalry in all of sports is born.

Not much has changed in the Big Ten over the past 70 years, as the conference pretty much remained the “Big Two, Little Eight.” Ohio State’s and Michigan’s dominance over one of the major conferences in college football means the outcome to “The Game” impacts the top of the standings every season. This is a big factor on why it is the best rivalry.

Although many college football fans remember Hayes as one of the greatest coaches ever, he is remembered by many Ohio State fans for his hatred of Michigan. Hayes coined the phrases “the team up north” and “that state up north," so he didn’t have to utter the word Michigan. The obsession with getting the best of “the team up north” was apparent, and although it seemed like hatred for his rival, the actions were rooted in respect.

Good rivalries are heated but the game is played with respect. These teams and fan bases do not like each other, but there is a mutual respect for one another. As long as that can continue and the teams stay at the top of the standings, the Ohio State-Michigan game will continue to be one of the best spectacles on the planet.

Buckeye’s Ryan Day is 1-1 against Jim Harbaugh and the Michigan Wolverines. Day will need to find a way to slow down Michigan’s rushing attack that ran for 297 yards against the Buckeyes defense last year. The Buckeye may be getting a little unexpected help because Michigan's Star running back Blake Corum was injured last game and may not be 100%.

Harbaugh got his first win in seven tries against the Buckeyes last season. He was in jeopardy of losing his job just a few years back because of his inability to beat the Buckeyes. Michigan is desperate to build off of last season's momentum and start a winning streak of their own over the Buckeyes. The last time the Wolverines won in back-to-back seasons was in 1999 and 2000. Both coaches are looking to make a huge statement by winning this game and possibly the Big Ten and National Championship Titles.

The nations eyes will once again be glued to another addition of Ohio State vs. Michigan this Saturday afternoon. No matter the outcome, the impact will be felt from New York to L.A. There is definitely nothing quite like it.