By Dylan Butler | Posted 18 days ago 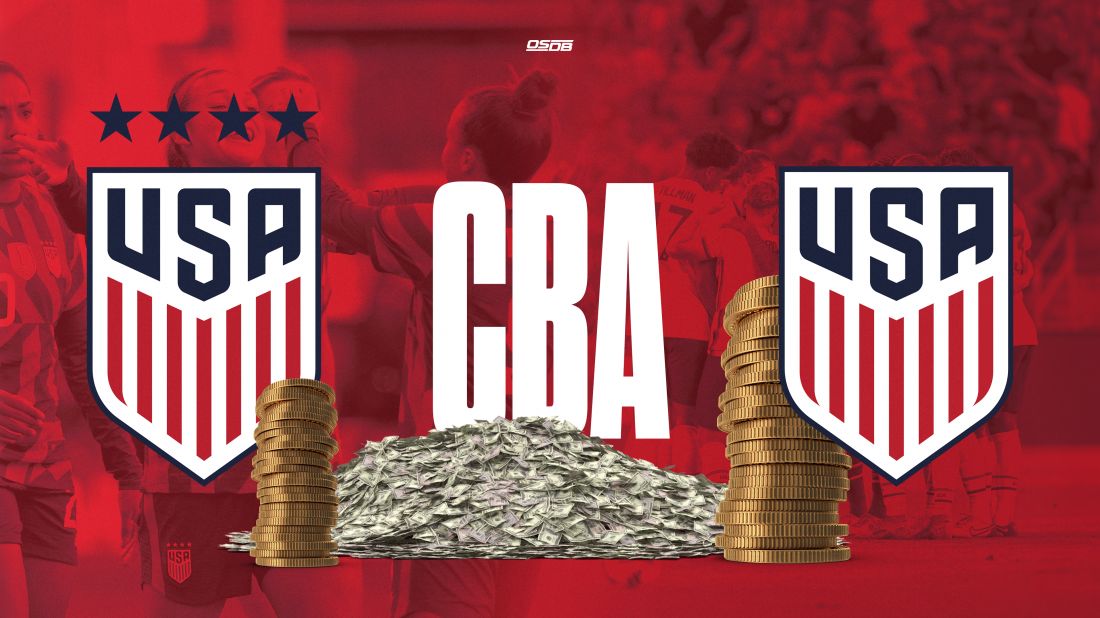 The U.S. Women’s National Team defeated Nigeria 2-1 in an International friendly at Audi Field in Washington, D.C. on Tuesday. A bigger victory was achieved on the field after the final whistle, when a historic Collective Bargaining Agreement was signed, bringing equal pay for US men and women’s national team players.

“Many of us have been in this equal pay fight for over two decades. But we did it. We are here today to sign the contract,” US Soccer Federation president Cindy Parlow Cone said. “And we have finally achieved equal pay for our men's and our women's national teams. Today, I stand on many people's shoulders. I couldn't have achieved this without the people that came before me and everyone that helped push this across the line.”

Parlow Cone, a former USWNT standout, was joined on the field by U.S, Secretary of Labor Marty Walsh, Senator Maria Cantwell (D-Washington) and U.S. women’s national team captain Becky Sauerbrunn, while many of the team’s stars, including Megan Rapinoe, Alex Morgan and Rose Lavelle watched on and celebrated the monumental occasion.

“I want to thank the players past to present for our persistence and basically never shying away from asking the question, why not,” Sauerbrunn said. “And I think us players really knew that we were on the right track and we started attracting some of the most brilliant minds in their fields to our cause.”

The fight for equal pay truly gained traction in March 2016 when USWNT players filed a complaint with the Equal Employment Opportunity Commission and a federal lawsuit followed three years later.

In a show of solidarity a few days prior, women’s national team players wore warm-up jerseys inside out to hide the crest before a SheBelieves Cup game against Japan.

"We've sort of felt that those are some of the undercurrent feelings that they've had for a long time," Rapinoe said at the time. “But to see that as the argument, as blatant misogyny and sexism as the argument against us, is really disappointing.

Cordeiro was replaced by Parlow Cone, who served as the vice president, and she vowed from the time she took over the two CBAs would have to address equal pay, which includes World Cup bonuses.

In February, the parties settled a class action lawsuit for $24 million and an agreement to create new CBAs for both the men's and women’s national teams was agreed upon in May. Both CBAs, which run through 2028, were signed on the field.

“What this team has been able to accomplish in getting a collective bargaining agreement is an incredible positive experience and a message to the rest of the country, that it's important that we respect our workers," Walsh said. “We respect that workers' rights and everyone should be paid equally for doing the same job as a man.”

The USMNT have been operating without a CBA since late 2018.

“On behalf of the men's national team. I just want to say how excited we are to partner with the women's national team to get this historic achievement done with equal pay,” he said. “We’re proud of you ladies, thank you so much for your leadership and work. Shout out to your players’ representatives for making all of this possible. And we look forward to seeing change around the world through FIFA to move in the same direction.”

Cantwell, who lauded Rapinoe and Lavelle, teammates on her hometown Seattle Reign for signing the original petition, also spoke about how she believed this was a watershed moment in the American sports landscape.

“We are going to use the power of this moment to get national legislation passed so that every young girl in every sport knows that we will have equal pay when it comes to sports in the United States of America,” she said.

Just before signing the CBA, Sauerbrunn credited the fans for their public pressure to help secure one of the program’s most significant victories.

“I want to thank you, all of you guys for all the support, all the social media posts, the messages of support, the chants of ‘equal pay’ at really funny times, showing up to our games,” Sauerbrunn said. “You guys make the difference and you are truly, truly the best fans in the world.”