By Steve Tsilimos | Posted 20 days ago 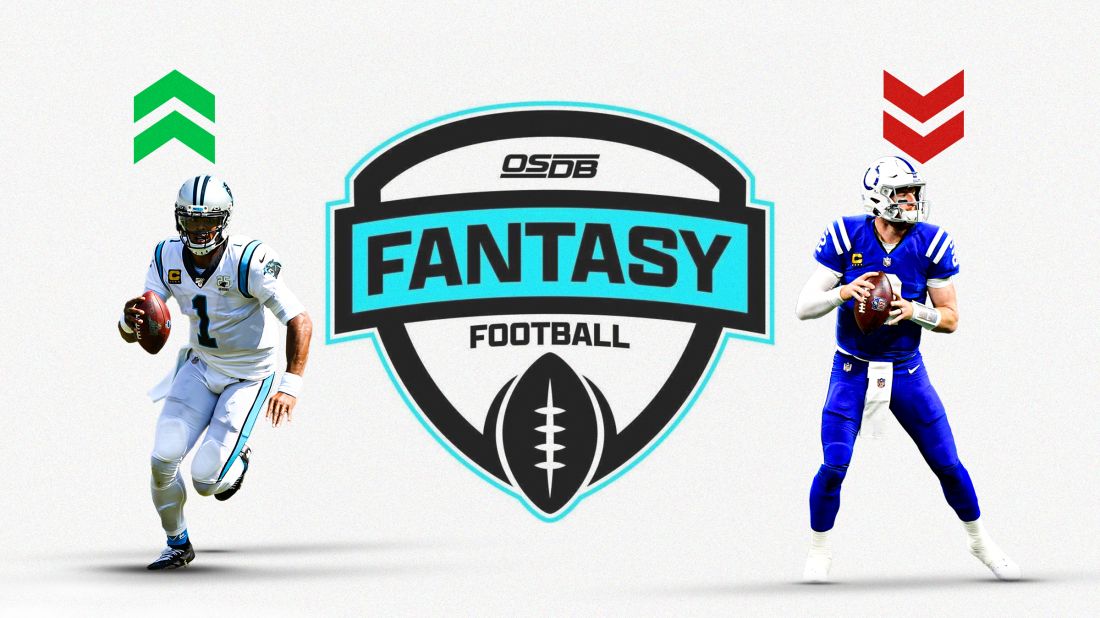 Colin Cowherd, host of The Herd on Fox Sports 1, said it best when he spoke about the AFC after Week 10, “Hide the White Claws the grown-ups are back.”

Cowherd was talking about the teams in the AFC that have proven-playoff-coaches who all seem to be figuring things out -- Chiefs (6-4), Bills (6-3), Titans (8-2) and Patriots (6-4). All four of the teams listed above won in Week 10 and would be in the playoffs if they started this week.

The AFC has been tough to decipher in the first half of the season because the top dogs like the Chiefs and Bills have been wildly inconsistent while teams like the Bengals (5-4) and Chargers (5-4) were winning games we were not accustomed to seeing those programs win.

The NFC, on the other hand, seems to be heading toward chaos, as the Buccaneers (6-3), Cardinals (8-2) and Rams (7-3) were all upset this past week. Meanwhile, the Cowboys (7-2) look like a serious Super Bowl contender, and the Packers (8-2), who are tied for the best record in the NFL, are winning with an elite-defense even without their best CB and DE. With that said, the longest-active-winning-streak in the NFC right now stands at one-game.

Cam Newton is back! Newton was signed by his former team the Carolina Panthers on Thursday of last week and played a handful of snaps in the 34-10 upset of the Cardinals. Newton scored two touchdowns (one rushing, one passing) in the game -- he did it on his first two touches of his NFL season.

The Rams landed Odell Beckham Jr. in free agency after he cleared waivers last week. The Browns decided to cut ties with OBJ because he has been a distraction and was not happy about not getting the ball enough.

Patriots’ WR Jakobi Meyers scored the first TD in his three-year-career. The undrafted WR entered Week 10 with 1,522 career receiving yards, the most by any player with zero TD catches in NFL history.

Rams’ WR Robert Woods tore his ACL in Friday’s practice -- the same day LA signed Beckham Jr. Woods, who is the Rams’ second-leading-receiver, will miss the rest of the season.

RB Aaron Jones suffered a mild MCL sprain in the Packers Week 10 shutout victory over the Seahawks. Jones is expected to miss at least two weeks.

Falcons’ RB/WR Cordarrelle Patterson suffered what appeared to be a high-ankle sprain in the first quarter. Patterson returned in the second quarter but did not play in the second-half of Atlanta’s blow-out loss. It’s likely Patterson misses the Falcons’ Thursday night game.

Eagles TE Dallas Goedert suffered what looked like a concussion. He was ruled out of the game and will enter the five-step protocol.

49ers RB Elijah Mitchell reportedly broke a finger and his status is uncertain for Week 11.

Washington’s DE Chase Young tore his ACL and will miss the remainder of the season.

There are only two teams on a bye in Week 11 and both are coming off bad losses. After this week there will be nine teams that still have a bye-week ahead of them.

Newton looked like his old self in his 2021 debut for the team that drafted him No.1 overall in 2015t. Newton is the current record holder for rushing TDs for a QB (71) and he should be able to add to that number as he takes on the starting QB role once again for the Panthers. Newton could be effective as a passer as well because he has plenty of playmakers around him.

RB Christian McCaffery who looked fully healthy and nearly unstoppable on Sunday will help Newton get some easy completions and yardage. The Football Team’s defense is ranked last against opposing QBs in fantasy and they just lost their star DE to an injury. Newton is the NFL’s newest feel-good story and he can also be that for your Fantasy team.

Wentz has been surprisingly good but just posted his worst fantasy performance. Wentz was held without a passing TD for the second time. The Colts leaned on RB Jonathan Taylor to help grind out a win over the Jaguars on Sunday.

Unless the Colts fall way behind early then I would think they will continue with their run-first game plan against Buffalo. The Colts will want to run the ball to control the clock and keep Josh Allen and the Bills’ offense on the sideline -- plus the Bills’ defense has been a nightmare for opposing QBs.

If you have followed Green Bay over the past two seasons then you understand why Dillion is a must start this week. The Packers’ second-year RB has excelled when he has been given the opportunity. Dillion finished Sunday’s game with a rushing-stat-line of 21-66-2 and he added two catches for an additional 62-yards.

Dillion, who is nicknamed ‘The Quadfather’ because of his massive quad muscles, is a downhill runner who is tough to bring down -- he is ranked fifth among RBs with a 2.4-YAC/Att (Yards After Contact per Attempt). With RB Aaron Jones sidelined, Dillion will be an every-down-back against a Vikings team that has struggled at stopping the run.

Stevenson shined against the Browns ripping off long runs at-will to help lead the Patriots to a huge win. The rookie -RB led the team with 20 carries for 100 yards and two TDs while leading the team in targets (5). RB Damien Harris (concussion) missed Sunday’s contest, which meant Stevenson was thrust into a bigger role.

The Patriots head to Atlanta on a short week for a Thursday Night Football matchup and it's questionable if Harris can return. With it being a short week, I think Harris will be on a snap count if he does return and Stevenson will get around 15 touches, which he should be able to turn into a decent line against the lousy Falcons’ defense.

The Bills’ backfield is going to be hard to trust moving forward because they decided to throw a third back into the mix with Moss and Devin Singletary. RB Matt Breida was activated for the first time since Week 2 and he scored two TDs in the Bills’ 45-17 blowout of the Jets.

Moss will undoubtedly be involved in the Bills’ offense, but he will be a TD-dependent option until something changes. To make things worse for Moss owners is that the Colts have the second-toughest run defense. It doesn’t stop there though -- the Bills take on four of the top-seven run-stopping defenses in their next five games.

Agnew has been the Jags’ player who has benefited most from WR D.J. Chark being on the IR -- posting 70 yards or a touchdown in three of the last four games. Agnew has a low-floor because Jacksonville struggles to find the end zone, but he is getting enough looks to warrant a flex spot in deeper leagues.

The Jaguars’ coaching staff continue to find ways to get former fifth-round-pick the ball in space. Agnew did not catch any of his five targets but he rushed for 79 yards and a TD on Sunday. Plus, he is one of the league’s premier returners -- Agnew is the first player in the Super Bowl era with a rushing TD, receiving TD, kick return TD and FG return TD in a single season

Johnson led the Titans in targets (6), target share (22.2%), receptions (5) and yards (100) against the Saints on Sunday. Johnson is filling in for injured WR Julio Jones as the second-receiving option behind WR A.J. Brown. The Saints decided to double-team Brown for most of the game, which left Johnson one-on-one.

The Texans will likely use a similar tactic to try to slow down the Titans’ top WR, forcing QB Ryan Tannehill to use his other weapons. I know it is quick to jump on the Johnson train but the Titans find ways to score and Johnson is now a big part of a good offense.

Beasley seemed to still be hampered by a rib injury in Week 10 that he suffered in the fourth quarter of the Bills’ Week 9 game with the Jags. Beasley only logged 11 snaps on Sunday, which is probably due to his injury and partly the Bills’ huge halftime lead. The undrafted WR is not on the injury report but he may need to miss some time to fully recover from a nagging injury. It is hard to trust a player who is obviously dealing with an injury.

Knox was active for the first time since Week 6 (hand) and recorded one catch for 13 yards. Bills’ QB Josh Allen was focused on his deep game, throwing mostly to WRs Stephon Diggs and Gabriel Davis in the Bills blowout win. Before Knox was injured, he was a top 5 TE in Fantasy -- scoring five TDs and recording 286 yards in his first five games.

The Colts have given up the sixth-most points to TEs, making Week 11 a perfect time for Knox to get back to his early season form. Add in that Cole Beasley is not 100% and Knox should be in line for some added targets.

The tide of Fantasy Football has shifted for Schultz once again. Not too long ago, Weeks 3-6, Schultz was a top-TE option as he had four games in a row, with more than 10 points -- one of  a 23-point performance in Week 3. In the three games since Dallas’s Week 7 bye Schultz has averaged less than three fantasy points a game. The Cowboys’ WR Michael Gallup returned from the IR in Week 10 and it seems that Schultz could be the player most affected by that -- recording one catch on two-targets for 14 yards.