By Liam Isola | Posted 4 months ago 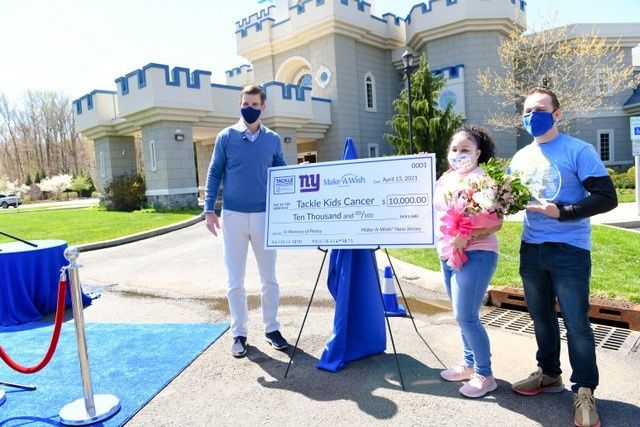 Penny Lindsay was a 2½-year-old from New Jersey diagnosed with neuroblastoma, a rare form of cancer. She was treated at the Children’s Cancer Institute of the Joseph M. Sanzari Children’s Hospital in Hackensack, NJ but passed away in February. Her legacy, however, will certainly live on through her generous wish.

Penny’s wish was to give back to the Children’s Cancer Institute. It was posthumously granted by Make-A-Wish NJ in an April ceremony. That ceremony made headlines due to a surprise appearance by Eli Manning, who has worked extensively with both Make-A-Wish NJ and Tackle Kids Cancer, Hackensack Meridian Health’s pediatric cancer research fundraising initiative.

The two-time Super Bowl MVP will likely make the Pro Football Hall of Fame one day and played all 16 seasons of his career with the New York Giants. His star shines as brightly through charitable endeavors.

The Giants will keep Manning in the organization, too, announcing Monday he will return in an in off the field capacity.

His ties with the team and with the fanbase run incredibly deep, and it's those relationships that his new responsibilities will tap into, as he'll help with initiatives stretching across business development, marketing and community and corporate relations. Manning will also collaborate with the Giants on original content development and fan engagement activations, including a new lifestyle series premiering this fall.

"I'm willing to do anything," Manning said in the release announcing his position. "But I'm focused on the business side with corporate partners and on community relations, which was always so important to me while I was playing here and is something, I've placed a high priority on throughout my life. I'm looking forward to seeing where I can make the most impact in helping the Giants achieve their business and community goals."

Manning’s appearance at the wish-granting ceremony earlier this year surprised Penny’s parents, Cassandra and Jack. It certainly didn’t surprise those who know him and was the perfect example of why the team wants him to return to the fold. 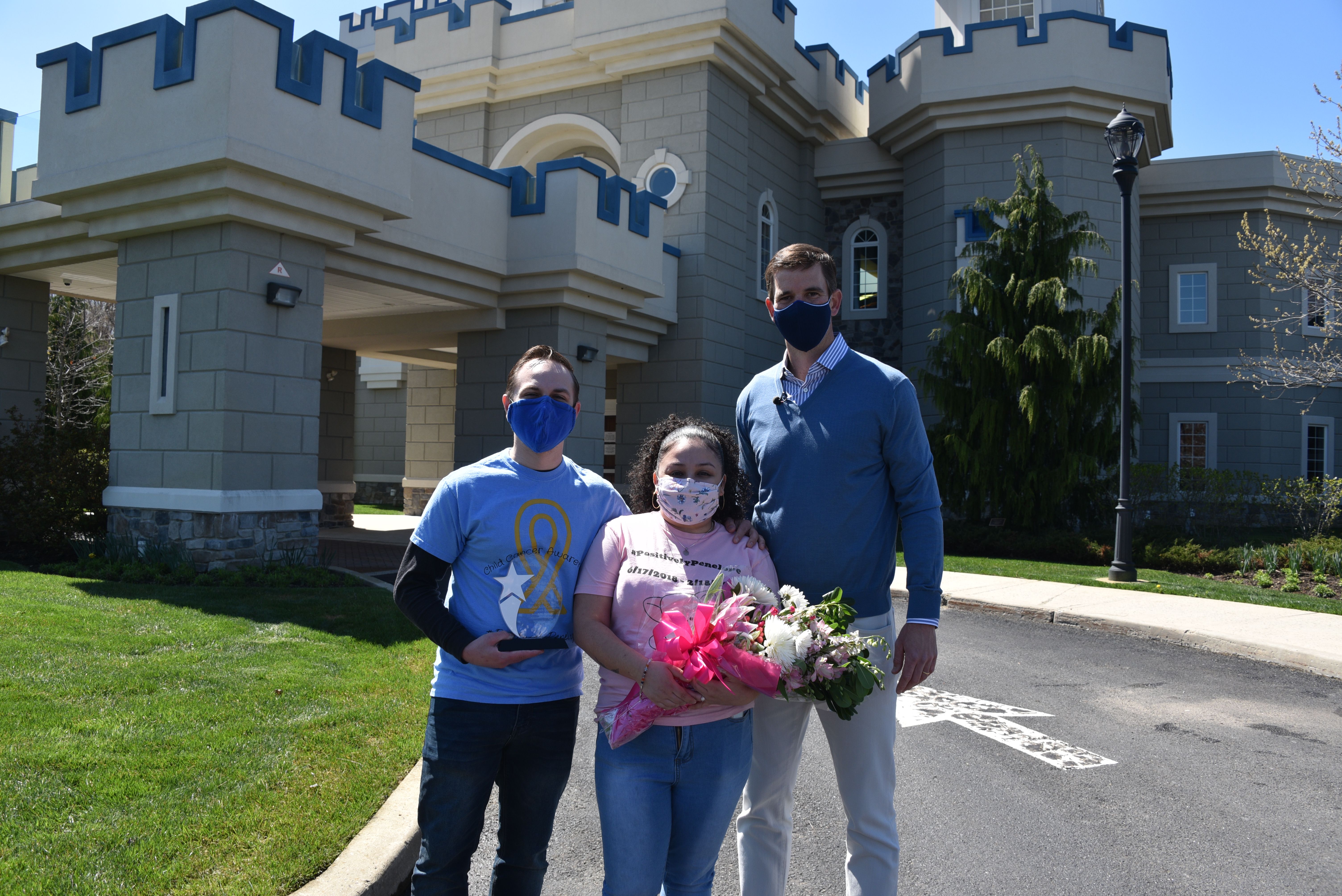 The New York Giants, Make-A-Wish NJ, and Tackle Kids Cancer are close partners. So, it seemed fitting that Manning, with his ties to all three, accept the gift on behalf of TKC.

“She was part of the planning and she said she would reach out to Eli and he did not hesitate,” he told OSDB Sports recently.

With the ongoing COVID-19 pandemic, it would have been easy for Manning to avoid such an event but that’s not the kind of person he is.

“He could have said no, he could have said I’m uncomfortable, let’s put this off until maybe more things open, Weatherall continued. “He didn’t, he said, “I’ll be there.” He knew how important this was to Penny’s parents ... to see the looks on their faces. The smiles on their faces and the joy it brought, we were so grateful to our friend number 10 and the New York Football Giants.”

Manning, who retired after the 2019 season, has been as involved in his charitable endeavors now as in his playing days.

In the words of Tackle Kids Cancer director Amy Glazer:

“Eli started from the very beginning when we partnered with the New York Giants, Eli had always been volunteering his time to come to the hospital and visit with children and he was happy to lend his name in support. What we’d noticed happening very quickly is that people were sending in donations because of Eli’s involvement. So, he was super generous in creating a campaign to encourage community donations called Eli’s Challenge. And every year Eli puts up his own money.”

Eli’s Challenge has reached its goal each year of its existence, with Manning personally matching up to $100,000 of donations.

Since inception in 2015, Tackle Kids Cancer has raised more than $10 million.

“We cure 80% of childhood cancers, the most common is leukemia but the second most common are brain tumors,” Dr. Alfred Gillio, director of the Children’s Cancer Institute at Hackensack Meridian, said. “And brain tumors are still extremely difficult to cure, in fact very few of them can actually be cured.”

Dr. Gillio mentioned Manning is interested in learning what the donations are going toward and about the science.

“Now, there’s real tangible benefits not just making the kids happy but actually having a lab and having research going and starting to get results. I think that’s really important for him,” the doctor said to OSDB.

Even with the new lab, Dr. Gillio said there’s more to be done.

“You now, although we can cure leukemia, the other solid tumors are really problematic. Neuroblastoma, like Penny had, bone tumors, muscle tumors are also very difficult so a lot of research is going into that area as well. But we’re building a big pediatric research department and effort. It takes a lot of people to do research so it requires a big staff.

“A great of the money has gone to hire staff and to get these trials up and running. It’s very expensive. Only about 4% of the budget from the National Cancer Institute goes to pediatric cancer so most of the money needs to come from donors and from philanthropy. So, that’s where we are, we need a lot more than 10 million dollars, I think it will come and there’s a lot left to do.”

Manning’s charitable endeavors were acknowledged when he became the first New York Giant to be awarded the Walter Payton NFL Man of the Year. He split the honor with Larry Fitzgerald in 2016, which the NFL describes as its highest accolade.

He and his Giants teammates were also recipients of the 2013 Chris Greicius Award, given annually to four or five of the most exemplary Make-A-Wish partners nationally.

Weatherall gushed about the quarterback’s involvement with Make-A-Wish:

“It’s always been an honor working with Eli because he is everything that his career showed. On the field and off the field. He’s a class act, he’s a humble and modest man, which I suspect is a difficult thing to maintain when you’re a celebrity athlete, but Eli has always maintained his modesty and his humility,” Weatherall said.

“He’s been an incredible wish-granting partner to us along with the Giants, one of the more popular requests throughout his career right out of the gates from 2004 when the Giants signed him right up to his retirement and over the years, he was part of well over 100, probably more like 150 wishes that the Giants granted during that time.”

Weatherall credits the Mara and Tisch families for embracing Make-A-Wish’s mission. In granting wishes, the Giants typically invite children with life-threatening medical conditions and their families to a Friday or Saturday practice before game day and allow the child to join the post-practice huddle. He mentioned the families get to stay after practice and have a meal with the Giants. The children are often able to have a catch and receive memorabilia and autographs.

It doesn’t stop there, as the Giants invite the child and their family to the game on Sunday where they’re on the sidelines greeted by celebrities and players who recognize them from the day before.

“And just when I think I’ve seen everything, I see something new, Weatherall said. “They’ll be on the sidelines until the start of the game and then usually the first or second timeout, the Giants invite the child and family out into the end zone to be introduced to 80,000 screaming fans.

“So when you ask what’s the relationship like with the Giants, they set the tone, they really set the bar for other NFL teams to mirror and many did. So, we would often get calls from our colleagues from around the country, hey what are these Giants wishes? The Giants kind of set the bar for going above and beyond and creating an extraordinary experience and that really inspired a lot of teams to do similarly. But, of course each one does it with their own fingerprints and they do their own thing that’s special to the child.”

Make-A-Wish receives no governmental support, so all of the funds used for Penny Lindsay’s $10,000 gift to Tackle Kids Cancer came from the generous support of the NJ community.

What makes Penny’s wish so special is that it was a wish to give back.

“What we learn is children typically answer that question in one of four categories: I wish to go, I wish to be, I wish to have or I wish to meet. There is a rare fifth category and it’s I wish to give,” Weatherall said.

Penny’s parents understood the need for funding pediatric cancer research and graciously gave back to the same institution that treated their daughter.

“They said that day at the castle when we surprised them with Eli there to accept the check in Penny’s name, that it’s all about giving back to a place that gave them such hope for their daughter,” Weatherall said. “But, ultimately they feel they need more funds so that there are less and less parents and children down the road that will have to go through the pain and suffering of losing a child at 2½. That’s what they’re hopeful for, so they’re giving back to the research, to keep from this continuing to happen.”

Perhaps the work that Tackle Kids Cancer is doing, with Eli Manning’s support, will make that hope a tangible reality.