Page: Derrick Lewis plans to continue to be a hit in Houston

Derrick Lewis plans to continue to be a hit in Houston 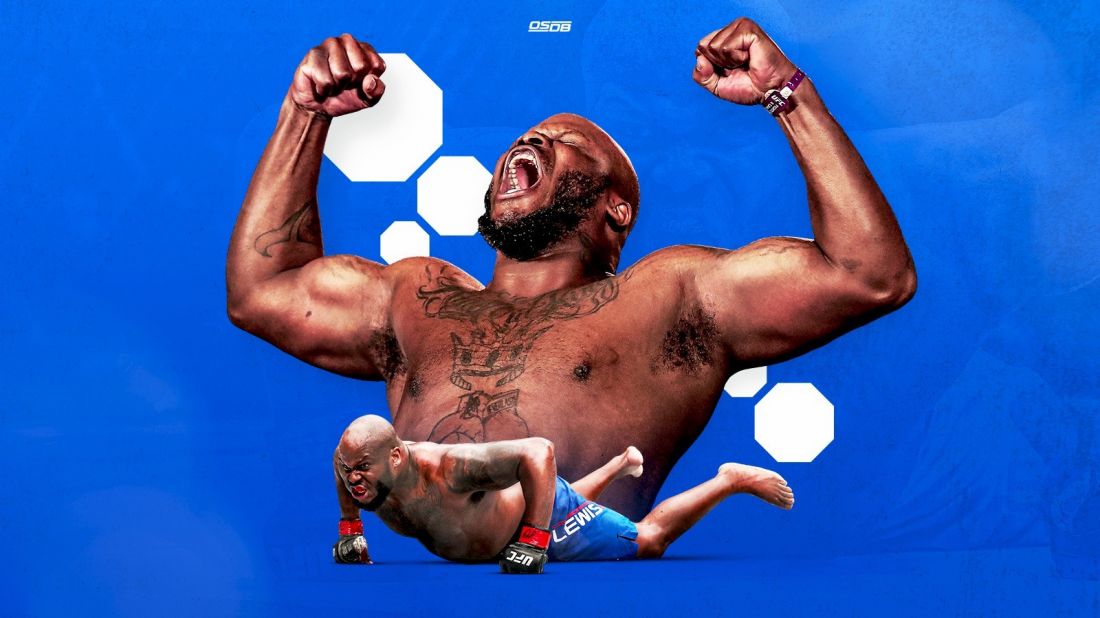 All Derrick Lewis wanted to do was drive a tow truck and provide for his family.

Sentenced to five years in prison after violating his probation while on a football scholarship at Kilgore College, he served three-and-a-half years, logging most of his time in the Central Unit in Sugar Land. When he was released, a simple life with a steady job and regular paycheck was all he sought.

Instead, he found a career in the cage, and Saturday night, at home in Houston, the man they call “The Black Beast” will be the final fighter to make the walk to the Octagon, marching into battle against undefeated French standout Ciryl Gane in the main event of UFC 265 with the interim heavyweight title hanging in the balance.

No one expected Lewis to become one of the best heavyweight mixed martial artists on the planet.

“I knew him from the local scene and I thought, ‘This kid is a puncher; he can fight,’ but man, nowhere in my head was I ever thinking he was going to fight (Daniel Cormier) one day or he was going to fight for the interim title in Houston, and neither was he,” explained Kru Bob Perez, Lewis’ longtime head coach and close friend, speaking with OSDB earlier in the month. “It was just, ‘I’m gonna fight, we’re going to see how this s*** goes, and we’ll give it our best’ and that’s it.

Nine wins in a dozen fights on the regional circuit earned Lewis an opportunity to compete in the UFC, and through his first five fights inside the Octagon, he amassed a 3-2 record, swangin’ and bangin’ his way to three stoppage wins while landing on the business end of the same outcome against the top competition he faced.

He was tabbed as an all-action addition to the heavyweight division, forecast to be a middle-of-the-pack lifer that carried thunder in his hands, but was limited overall; a true heavyweight with a menacing scowl, round belly, and a questionable gas tank.

When he started putting together a winning streak with victories over regional standouts and experienced heavyweight veterans, few thought the soft-spoken puncher would develop into a legitimate contender, including Lewis.

For the first several years of his UFC career, whenever I talked to the now 36-year-old standout about his ambitions and the possibility of entering the title picture, he scoffed at the idea and said he didn’t care. His only concern was providing for his family, and joking around on Instagram, where his penchant for NSFW memes and general ridiculousness aided in his development from an unknown heavyweight knockout artist to an emerging cult figure.

Along the way, he became an emerging contender and Houston’s favorite fighting son.

When Hurricane Harvey caused flooding throughout the city in 2017, there was Lewis, a menacing, imposing figure inside the Octagon, behind the wheel of his jacked-up truck, helping those that were stranded, and doing whatever he could to support those throughout the city that continues to show him nothing but love.

Since then, he’s led the Texans onto the field, messed around with Clutch at Rockets games, and thrown out the first pitch at an Astros game, though he didn’t quite get the ball to home plate, as well as being immortalized in a mural by local artist Donkeeboy ahead of UFC 247 last year.

Inside the cage, he followed his 3-2 start by amassing nine wins in 10 fights, parlaying a last-second, Hail Mary finish of Alexander Volkov at UFC 229 into a championship opportunity against Cormier a month later at UFC 230 at Madison Square Garden.

“Derrick genuinely loves this city and he’s a favorite here,” said Perez, launching into a story that shows just how highly people in Houston think of this weekend’s main event attraction.

“He and I and a friend of ours were at a Bon Jovi tribute band concert a few months back, and I went to get a beer, and I heard somebody say, ‘Man, that’s Derrick Lewis.’ I swear I’m not making this up, he said, ‘When I think Houston sports, I think Nolan Ryan and Earl Campbell and Derrick Lewis.’”

The leader of the Main Street Boxing Club paused, his excitement and pride radiating through the phone.

“His growth as a fighter is pretty obvious, but I’m most proud of his growth as a human,” continued Perez, a diminutive 50-year-old with a waxed and rolled mustache, shaved head and myriad tattoos that stand as a unique contrast next to his heavyweight charge. “He doesn’t like to talk about his stint in prison, which I don’t blame him, but I do remind him to be proud of where he’s at now.

“I remind him regularly that regardless of if we win the world title, him getting there — as corny as it sounds — he already won.”

In those early UFC years, Lewis would get nervous ahead of interviews, anxious about reporters asking about his time in prison. He felt awkward discussing the darkest moment of his past, afraid that he wouldn’t say the right things or that his words would be twisted and taken out of context.

Sick of being unsure about the questions that were going to come his way and the answers he provided being conveyed properly, the heavyweight standout opted to seize control of the conversations, providing deadpan responses to earnest questions about his fighting career and preparation, leaving reporters laughing and unsure if what they’d just been told was true.

“He doesn’t even have to answer your question; he’s just going to say whatever,” said Perez, highlighting one of Lewis’ favorite tactics. “He doesn’t pre-plan these things either; he’s an evil genius.

“He literally just says whatever he wants and I think it’s one of the best things he ever could have done.”

Along with turning him into a must-watch interview and human quote machine, playing the wry court jester allowed Lewis to spin tales of lackadaisical effort in the gym and limited training sessions, obscuring his genuine skill and constant incremental development from those happy to simple relay his words without sifting through the subterfuge.

The way he was presented in the media and on broadcasts didn’t hurt either, as Lewis was often framed as an unskilled brawler swinging cinder blocks at his opponents; a brute with rudimentary talents, but a puncher’s chance as long as he was still standing. He was and still is unconventional inside the cage, eschewing technique and fundamentals for tactics that work for him.

All of it combines to make Lewis a difficult man to decode, resulting in many failing to give him credit for his abilities as a mixed martial artist.

“This is the thing: Derrick is always going to say s*** like, ‘I train 30 minutes a day’ and people are dumb enough to believe that s***,” laughed Perez. “But, he’s not completely lying either.”

While there were times when injuries limited what Lewis and Perez could do in advance of a fight, those days are behind them, as he’s been working with a clean bill of health and none of his previous limitations since undergoing a long-overdue surgical procedure on his knee following his March 2019 loss to former champion Junior Dos Santos.

Since then, Lewis has gone 4-0 while cranking up the amount of “fight stuff” he does with Perez, jiu jitsu and grappling work with coach Joe Murphy, and doing serious strength and conditioning work with Alyssa Cantu at Grindhouse Fitness, each of whom the he heralds as integral pieces in Lewis’ ascent to challenging for UFC gold this weekend.

“I’ve been with Derrick six days a week this camp and that never happens,” explained Perez. “He is actually moving around with big men. He’s rolling, he’s grappling, he’s wrestling, he’s doing live rounds, and that’s where you’re seeing the change.

“It’s hilarious — it’s kind of offensive as well — when the headlines say, “Derrick Lewis shows MMA doesn’t work on him.’ What the f*** does that mean?” his coach asked with annoyed incredulity. “He’s a mixed martial artist. He’s beaten high, high level black belts on the ground. He’s knocked out far more technical strikers than him.

“It’s never going to be beautiful because that’s not who he is, but you better bet your f****** a** he’s a mixed martial artist.

“Derrick’s slow? F*** you!” continued Perez, fired up by the ways Lewis has been mischaracterized and misrepresented in the media over the years. “This is one of the quickest men I have ever seen in my life. He’s fast and faster — I’m going to say it and you can write this s*** — he’s faster and quicker than Ciryl!

“Ciryl looked very fast when he fought Volkov because Volkov put on 20 pounds and Volkov already wasn’t a very quick-twitch guy, but watch Derrick explode — he’s like an alligator or a crocodile in that he’s going to wait and wait, but when he goes, m*****f***** he’s going to go and it is fast and it is scary and you cannot stop it.”

A Great Fighter, An Even Greater Friend

Currently stationed at No. 2 in the UFC’s heavyweight rankings and carrying a four-fight winning streak into the clash with the undefeated Gane, there is no denying that Lewis is an outstanding fighter.

What Perez wants everyone to know is that the vaunted knockout artist is a better guy outside of the cage.

“Yes, he’s crazy and he’s funny, but he’s a good human being, man,” said his coach. “Will he admit it? Probably not, but his actions show it.

“I’ve had 11 surgeries in my career and since Derrick has been in my life, he’s been by my wife’s side, just the two of them, in the waiting room, for every one, just to make sure that I’m okay.

“I held off for a knee surgery until he got his knee surgery so that we could do it together. He was a bit wary of going under the knife — he’d never had a surgery before — and I was like, ‘We’ll have them together and we’ll rehab together’ and we did.”

Perez views Lewis and his family as his own kin, explaining that they often celebrate holidays together and that he, Lewis, and their wives have a tradition of hitting up the shops on Black Friday.

A few years ago, the loss of a pet forced Perez to cancel those plans on Thanksgiving. The following day, his phone rang at 8:30 in the morning; it was Lewis.

“He asked if I was up, and when I said I was, he said, ‘Get dressed and come outside,’” recalled Perez. “He was waiting outside just so we could drive around. He didn’t bring anything up — he just wanted to be with me because he knew I needed him.

“We just drove around in his Lambo, joking, laughing, and that’s what people don’t see. That’s why I’m very fortunate to have him in my life and see a side of him that a lot of people don’t get to see”

Those close to him see it constantly, and the City of Houston and its residents have seen in regularly, in good times and bad, as “The Black Beast” has grown to become one of the most famous and popular athletes within the community, which is why this opportunity on Saturday night — to fight for UFC gold, at home, at Toyota Center — is such an incredible moment.

And if Lewis hands Gane his first defeat and walks out of the Octagon with the interim heavyweight title slung over his shoulder?

“All of the city is going to f****** go crazy,” predicted Perez. “Derrick genuinely loves this city and he’s a favorite here.

And all of Houston is invited.