By Liam Isola | Posted 5 months ago 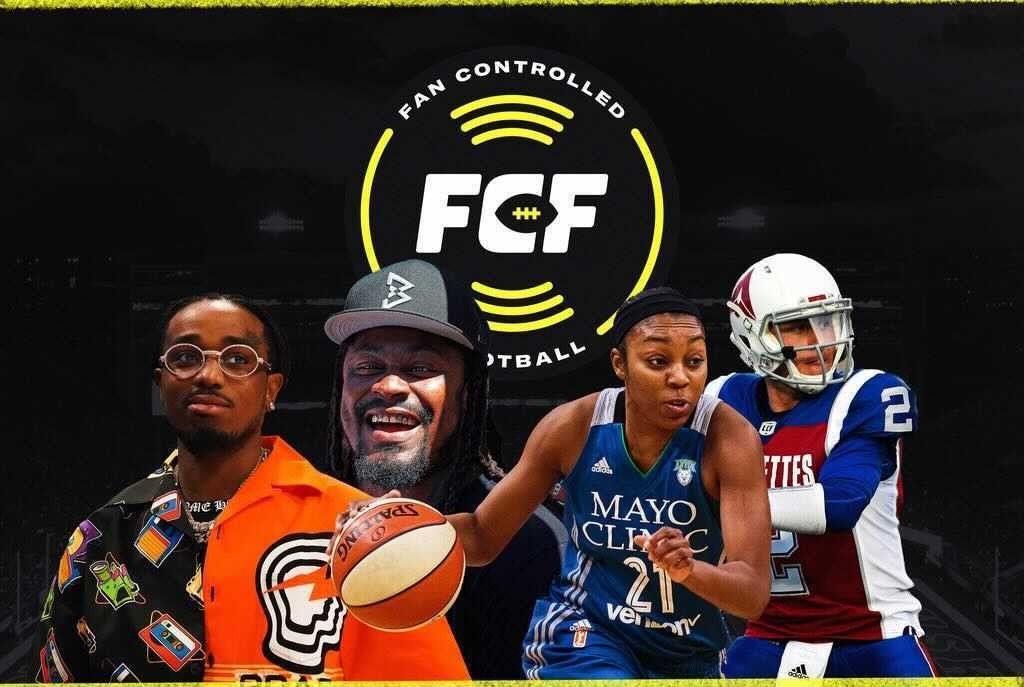 Ray Austin played three seasons in the NFL in the late ‘90s with the New York Jets and Chicago Bears before successfully transitioning into acting, modeling and other business ventures. One of the many hats he wears, he’s now the commissioner of fledgling football league, Fan Controlled Football.

The 7v7 league is coming off of a successful inaugural six-week season played in a bubble outside of Atlanta, which finished in March. Ahead of its debut season, FCF secured ownership commitments from names like Quavo, Marshawn Lynch, Richard Sherman and Renee Montgomery. Former NFL players Johnny Manziel, Josh Gordon and Robert Turbin signed on as players.

FCF has innovated the fan experience in football by giving fans control of most everything. Most notably, they call live plays in the FCF app during games, which are streamed on Twitch. Rosters are also filled by a weekly live draft, excluding two franchise tagged players per team.

Fans also voted on the name of the title game,“The People’s Championship,” which was won by Greg Miller and Austin Ekeler’s Wild Aces over Quavo’s Glacier Boyz, 46-40. Over 2.1 million people tuned in for the playoffs and between Feb. 13 and 15, the FCF app was the most downloaded sports app on the Apple App Store.

OSDBSports.com previously spoke to Fan Controlled Football COO Andy Dolich and recently caught up with Austin to talk about all things FCF.

When recalling what went right in season one Austin said, “Well thank God that the technology worked. We needed that at first, but I think a lot of things worked and we were happy with it. I think people gotta remember we were a start-up Football League during a pandemic.

“So I thought our team created an environment for the players to be able to play ball and be safe. I think we did a really good job with that and that was our number one goal to make sure our players were safe.”

FCF had no COVID outbreaks and was able to progress seamlessly through its six week schedule. The standard of play was a surprisel.

“I think a lot of people were skeptical because when you come up with new leagues, if you’re not the pros, everybody wants to say well that’s not pro football,” Austin said.

“So we were blessed to get one of our guys in the NFL in the first season, Travis [Toivonen]. That was a plus for everyone.”

A 6-foot-3 wide receiver who totaled five TDs in the FCF, Toivonen signed with the Seattle Seahawks. FCF QB Jackson Erdmann also recently worked out with the Minnesota Vikings.

The FCF to pro pipeline doesn’t surprise Austin, though. He acknowledges it as a goal of the league and something that has already raised the profile and credibility of Fan Controlled Football.

“Look, as a football player, as an athlete, I told my guys you know you’re here to make a resume, a digital resume,” Austin told OSDB. ““We had over 10 million people around the globe watching us so we knew that these guys were going to get a lot of exposure. And the fact that our football ops was able to put together a product where guys could go on and still play football, I thought, that’s all you’d ask for as a player.”.

While Toivonen and Erdmann are getting their shots at the NFL, running back Madre London has found success in Europe. FCF’s deep pool of talent meant London didn’t get many touches, but he’s now the leading rusher in the European League of Football.

Expect these pipelines to continue to strengthen but the talent that FCF has already attracted is undoubtedly impressive. How did a football tech startup manage to land Manziel and Gordon?

“Man, you know what, that stuff kinda fell in our lap to be real with you,” Austin said. “You know our team owner Bob Menery, he’s a character, he’s a trip .. .but Bob is connected with a lot of players for what he does with his brand.”

“You’d be very surprised that Bob Menery is Johnny Manziel’s mentor. Bob was literally just like I’m invested in this and I wanna make my team awesome and I’m gonna go out and get it. And he really kind of set the tone for that, we were like let’s do it...why not get Johnny Manziel?

“And then we got Josh Gordon, then we were like you know what let’s tell all of our other team owners that. And then Marshawn called me and was like..I got a guy … Robert Turbin..great.”

The colorful and controversial Manziel delivered.

“I remember having a conversation with Johnny and going up to Arizona, throwing the football around and meeting with him because I wanted to make sure he knew that this is not a joke. We’ll make sure this is clear, ‘I know you went from the top of the top in the NFL and now you’re playing here but we want you to really be a team leader,’ and he did a hell of a job. I was surprised how he was able to adapt to our culture as fast as he did.

“And same thing with Josh...I think Josh looked at this as more of a redemption, a place where he said, ‘I want people to see me in a different light and I’m gonna use the platform’. Everyone knew he was a baller so that didn’t really matter. Everybody knew he was gonna come and you know make great plays like he did in one of the games that he had.

“But, I think he wanted to see us as a platform for him to show other people that yeah, hey I made a mistake but I’m back and I’m ready to play football again,” Austin added.

With these high-profile players, innovative rules, celebrity and NFL player owners, sponsorship dollars, and a couple million viewers for the playoffs, FCF got off to a great start. The commish is optimistic … to a point.

“I feel like a rapper .. .because of how you come out with that platinum album and you don’t wanna have that sophomore slump,” he said. “We’re always in the lab and all of us are going: look, the foundation that we created is dope..it’sawesome..we’ve done a great job with that. How do we build this thing? How do we set ourselves apart from everybody, including the NFL?

“The people around this are incredible, everybody is an All-Pro at what they do and I think that’s what makes this team so great. I keep telling a lot of my old teammates, they’re like ‘man how did you do all this.’ I’m like...‘bruh I ain’t that smart.’ I know I couldn’t have done this all by myself. But when you start putting together a superhero team, like we have, it gives all of us confidence that we’re gonna make this work.

“The future’s so bright because we can create and do whatever we want. We have no rules, no policies, no regulations that are gonna stop us from coming up with an idea. We’ll have a phone call and everybody’s just throwing out ideas and boom we all like it, let’s go with it.”

As someone who straddles both the sports and entertainment world, OSDBSports was curious if Austin would continue pursuing and/or had a wish list of future celebrity FCF owners.

“Oh, absolutely. Look, that’s the thing that we stand by is more than an athlete, is being more than just a football player here. So, if you look at some of our team owners now..if you look at Bob Menery, he’s become an influencer out of nowhere.

“If you look at Deestroying he’s really the definition of the actual NCAA NIL policy that just went through. He was a kicker that became an influencer and he had to give up his scholarship because he was making money.”

While Glacier Boyz co-owner Deestroying may have had his football career cut short by former NCAA policy, that won’t be the case anymore for college athletes currently trying to create a brand. When asked if the NIL policy changes scouting or impacts Fan Controlled Football, Austin said:

“Not at all, it’s actually a plus and it’s something I’ve been waiting for for a long time. I’ve actually been working on something to actually get players more involved. I’m gonna be starting a podcast called Athletes Plus to start talking about the types of opportunities that are out there for people.

“Back in my day I had a sports agency that put athletes in commercials. So when I was done playing, my agency represented me and I became an actor because of that. So, I mean like hey I know a ton of athletes that want to get into the industry so I was able to start getting athletes doing commercials and modeling jobs and whatnot. So, what’s going on with the NIL thing right now is incredible and it’s long overdue.

“The fact that college players can now start creating and working on their brand in college is incredible. As a player, when I was done with the NFL and when it was over it was hard because I didn’t know what I wanted to do. Every player goes through those two or three years where they’re saying “how do I recreate myself?” And some guys go into coaching, some guys go into broadcasting, I went into acting. So that’s what we wanna do.

“The NIL situation is only gonna be a positive for us. We’re already reaching out to a lot of the college players right now to possibly be team ambassadors for us and talk about football and be engaged with what we’re doing. And we’ve gotten some tremendous feedback from those guys,” Austin.