Page: Ben Simmons will be moving: The Question is Where Will He Land?

Ben Simmons will be moving: The Question is Where Will He Land? 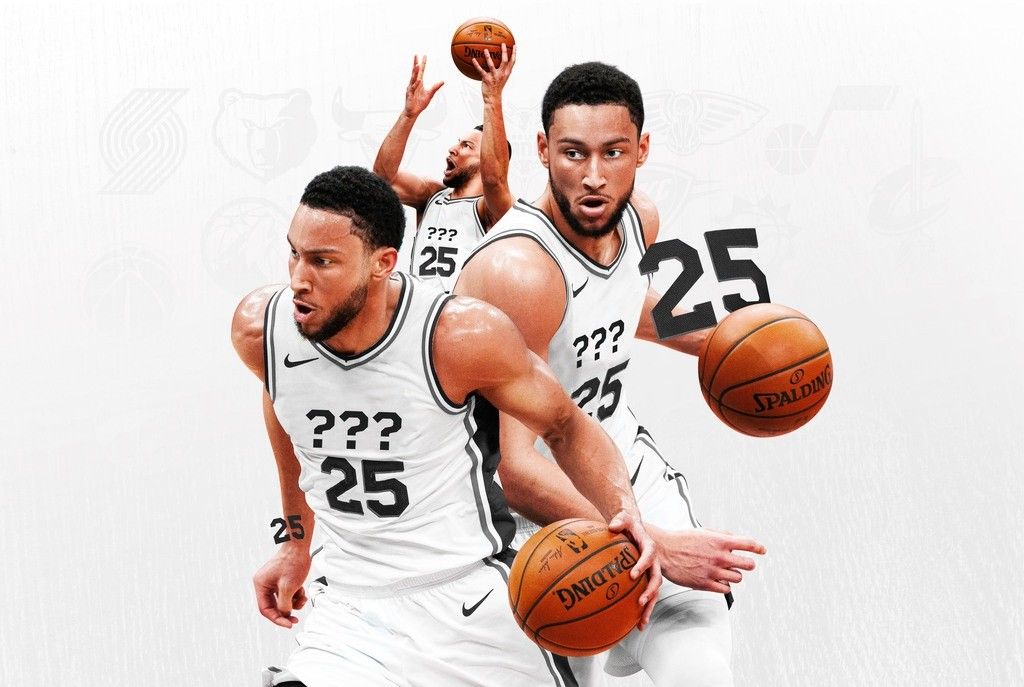 The marriage between Ben Simmons and the Philadelphia 76ers is going to come to an end. It’s not an “If” question any more, it’s a question of “when,” and how messy things are going to get before the inevitable happens.

The prospect of dealing the 2016 first overall pick lived in the ether for the last several seasons, as each quest to reach the Eastern Conference Finals came up short and questions about whether Simmons and franchise cornerstone Joel Embiid could play together effectively persisted.

The team retooled, overhauling things following their first-round exit from “The Bubble” in the 2019-2020 season by bringing on Daryl Morey as President of Basketball Operations, adding Doc Rivers as head coach and swapping out Al Horford and Josh Richardson for Seth Curry and Danny Green, the idea being to surround Embiid with more shooters.

Simmons was nearly dealt early last season, as Morey tried to bring James Harden from Houston to the City of Brotherly Love. It has been reported that discussions got so far that Simmons (and Matisse Thybulle, who was also set to be moved) were told to be ready for a trade, but it never came together. Harden went to Brooklyn, the Sixers remained intact, and the season again ended with a second-round playoff exit.

In the seventh game of Philadelphia’s series with Atlanta, Simmons passed up an open layup (or dunk) late in the game and generally disappeared in the fourth quarter of games, leading to his getting roasted by fans and media while leaving Embiid and Rivers confounded following the defeat.

As soon as the season ended, Simmons demanded out, but with only a few weeks until training camp begins, he remains a member of the 76ers; the club wanting a massive haul of assets in order to move the 25-year-old point forward, and the player trying to pick his own landing spot, noting that he’d like to play in California.

Between the eye-popping asking price and the many warts that have accumulated on Simmons’ game over the last couple of seasons, no team has come forward with the kind of offer that gets a conversation about moving the Australian started, yet alone down the road far enough that it becomes something whispered about on NBA Twitter.

As the start of training camp draws nearer, all 29 teams that currently don’t have Ben Simmons on their roster should be huddled in a boardroom at their team’s facility, working through potential deals and figuring out what they could present to Morey and the 76ers in order to get Simmons into their building and onto their team next season.

The reason Morey has affixed such a huge asking price to Simmons is because he knows that despite his various shortcomings and how bad it looked down the stretch in the playoffs, he’s still a 25-year-old talent signed to a multi-year deal with the ability to potentially flourish.

Everyone knows his flaws and his shortcomings, and are quick to shout them out whenever the idea of their team trading for him is broached.

If all of those remain as they are, the possibility of adding Simmons is still worth exploring for each of the other teams because an All-Star with four years remaining on their contract and consecutive appearances on the NBA’s All-Defensive First Team don’t appear on the market often, especially not as distressed assets.

It doesn’t matter that he’s told the Sixers there are a handful of teams he’d like to play for next season — his contract statussignificantly reduces his leverage, meaning he either has to go wherever he’s dealt and play or sit out and sacrifice game checks, which seems highly unlikely.

So though he would like to play in California, every team in the league, including the four in “The Golden State,” should be seeing if they could make something work because the former first-overall selection is the type of next level talent you have to at least think about adding when you have the opportunity.

Simmons is the kind of player no small-market team is going to land in free agency; he’s not signing with Indiana or Oklahoma City or San Antonio, which is why each of those teams and all the other non-destination clubs throughout the league should be at least working through potential deals on ESPN’s Trade Machine and scribbling ideas on a dry erase board somewhere in their team facility right now.

Could New Orleans pry him away from Philadelphia with a package built around Brandon Ingram, Nickeil Alexander-Walker and a couple of picks, bringing Simmons in to team with Zion Williamson?

Ingram has been good for the Pelicans and Alexander-Walker is a rotation player with plenty of upside, but are either so vital to the team’s future that you don’t explore the possibility of moving them to add one of the five best defensive players in the league to play alongside Williamson, who is heading into his third season (and third coach) in New Orleans and could follow the Anthony Davis blueprint if the team doesn’t start building something successful around him soon.

While a team like the Los Angeles Lakers doesn’t have any real pathway to bringing Simmons into the fold, you can be certain that LeBron James at least had a conversation with General Manager Rob Pelinka about whether they could add another Klutch Sports client to the squad for next season.

The NBA Champion Milwaukee Bucks should be looking at what kind of deal they could put together in order to get add another defensive stopper to its lineup, though Morey seems unlikely to send Simmons to a team Philadelphia would have to get through in order to advance to the NBA Finals.

This could be the next “Toronto trades for Kawhi Leonard” moments, with the added benefit of Simmons being under contract for the next four years. And yes, you better believe Toronto’s braintrust of Masai Ujiri and Bobby Webster are talking about potential Simmons deals.

Admittedly, there are some teams where the fit wouldn’t make sense, like Dallas next to Luka Doncic, in Denver with Nikola Jokic, or playing with Jimmy Butler again in Miami, but those clubs should be doing their due diligence on potential Simmons deals in order to determine if there is a three-team swap that makes them better while helping facilitate getting the three-time All-Star out of Philadelphia.

For the record, a three-team deal involving Philadelphia, Toronto, and Dallas with Simmons and Dwight Powell going to Toronto, Pascal Siakam, Jalen Brunson, and Maxi Kleber going to Philadelphia, and Goran Dragic and Matisee Thybulle headed to Dallas works in the Trade Machine, and kind of works for each franchise too.

A Fresh Start for Everybody

Simmons has his flaws and no team attempting to acquire him should be going into this thinking, “We’ll fix everything and get him shooting threes” because that’s not likely going to happen, regardless of how many great workout videos of him knocking it down from deep have been released this off-season.

Even then, he’s still a 25-year-old, three-time All-Star and perennial Defensive Player of the Year contender, whose max extension started last season, and in the right situation, with the right pieces around him, Simmons has the skills to be special.

Philadelphia doesn’t have to move him — the 76ers can call Simmons’ bluff and see if he is willing to hold out and go without game checks — but chances are they don’t want to be dealing with Ben Simmons drama all season either, so why the asking price might be astronomical now, it should start coming down the closer the season gets.

Simmons is likely to start the season on a new team, and there are 29 franchises that should be investigating how they can help make that happen, one way or another.