Page: AFFL continues to grow as flag football generates buzz around the country

By Cameron DaSilva | Posted 2 months ago 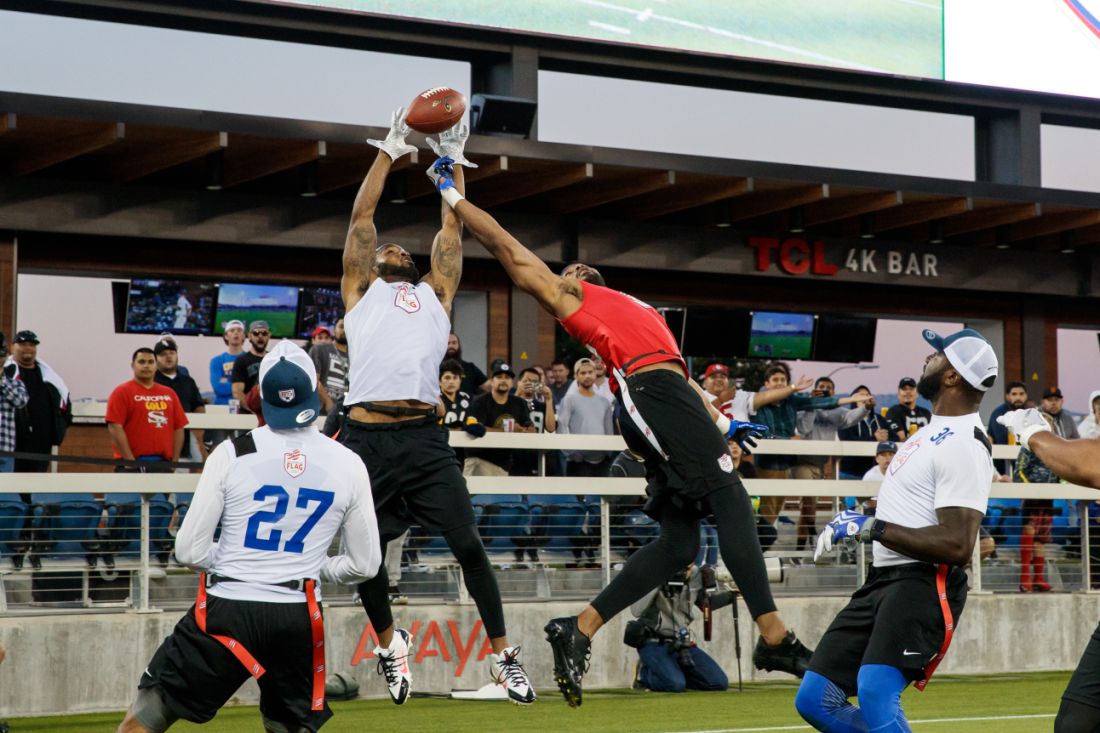 Jeff Lewis was watching his son’s third-grade flag football game about five years ago, marveling at how exciting and entertaining it was. And then he watched a kid on the opposing team pull his son’s flag at the one-inch line.

It was that miraculous play that gave Lewis an idea well outside the realm of his career as a hedge fund manager at the time. He wanted to start his own flag football league for elite athletes – ex-NFL players, Division I studs and amateurs who never made it to the professional stage.

“The fact that something memorable and amazing happened, I walked away saying it’s got to be more about the game and the platform it provides than it was about my son and the kid that pulled his flag at the one-inch line,” Lewis told OSDB Sports via phone.

A year later, the American Flag Football League was launched by Lewis, who’s the founder and CEO.

Now entering its third full season, the AFFL has growl wildly in popularity. Former NFL stars such as Michael Vick, Chad Ochocinco, Terrell Owens and Vince Young have participated in the league. Despite being past their prime, they’re all rare athletes with impressive physical traits.

The first game played with those big-name players was live streamed on Twitter and shared on YouTube afterward, generating way more engagement and interest than Lewis could’ve imagined – to the tune of 3 million views to date. About 800,000 people have watched the entire two-hour video, which is more than the 250,000 viewers average by an MLS game on national television, Lewis says.

“We created this event and without any promotion, it went wildly viral on YouTube, really going against all of the norms of YouTube,” he said. “We’re doing all of these things to try to create meaning and connection so that we’ll watch things and yet here’s a game in a new league, new sport, doesn’t count, exhibition game, no fantasy, no gambling, outcome of the game doesn’t matter. And at the end of the day, 800,000 people or so have watched the entire two-hour video.”

That’s when Lewis really knew he had something on his hands. This year, the AFFL reached a multi-year agreement with CBS Sports to broadcast its games live this fall. It’s the next major step in the growth of the AFFL, which has more than 3,000 players around the country, headlined by stars such as Owens, Vick and Ochocinco.

This deal with CBS Sports opens the door for former NFL safety Will Blackmon, who will be an analyst and color commentator on broadcasts for the AFFL.

This isn't his first time calling a game, but it could be a major break in his career. Lewis hopes to vault him into a bigger role the way Dan Orlovsky’s platform has grown since he called AFFL games in the league’s first year.

“This happened organically for me. I'm just obsessed with football in general,” Blackmon told OSDB. “That came from my father because he was a diehard football guy. He coached every single level, every gender. Everything. He coached inmates. He coached everyone. Football in our house, it didn’t matter what level, we watched it or we coached it.”

“I grew up watching my father coach and actually, my father played flag football,” he continued. “He played college, semi-pro. And I remember when he moved from New York to Rhode Island, which is where I’m from, he joined a professional flag football team. I remember going to his games. That was my first introduction to football, was flag football. They played tournaments all over the east coast. Some national tournaments. His team was actually ranked 16th in the nation.

“Any type of football, like if I'm walking in the streets and I see kids playing flag, I’ll watch it. So when I saw this, I said, ‘This is super cool.’ I thought it was super cool to watch and I respected the level of competition. The more I got to know about it, the more intrigued I became.”

Blackmon is thrilled to have this chance to call AFFL games, saying he can “talk football for days.” He’s had an interest in the broadcasting industry but since his first game as a commentator a few years ago, he’s always wanted to be in the booth as an analyst.

His first taste of this role came in 2018 at the Causeway Classic between Sacramento State and UC Davis.

“That was such a unique opportunity because it was last minute to go out there. I barely had any film, I had no preparation. I made my spot board the day before,” he recalled. “The game was supposed to be in California, in Sacramento and that’s when the California fires were in (2018), I believe.

“They moved the game to Reno, Nevada, and so me and the guy I was working sat in the car together and we drove from Sacramento to Reno. That was the first time I ever called a game and when I was there in the booth, I said, ‘OK, this is where it’s at. To be up here, to talk football, to have fun, to watch the game, to be at the stadium, that was life for me.’ So right then, it hit me in the spot where I’m like, ‘If I want to do anything in broadcasting, sure, the studio stuff is fun. Other things are cool. But I would love to call games.’”

Lewis thought it was important to put each division on equal ground as far as prize money goes, in part because he feels women’s flag football could be the biggest sport in the world.

“First and foremost, this is a business. It’s not a charity. We’re not trying make a statement. We’re not trying to do something to create social benefits but hurt the business,” Lewis said. “In the long run, I think the women’s game has the possibility of being larger than the men’s game. I think it’s going to be the biggest sport in the world, flag football.”

Unlike the men’s side, the women don’t have the NFL as an alternative like the men do. So, it allows the women to stand out and become stars in the AFFL.

“All the drivers to make the women’s game go are partly the result of the fact that they don’t have the shadow of tackle football the way the men do,” Lewis said. “So if somebody watches one of our men’s games, they say, ‘Oh, why isn’t Michael Griffin in the NFL anymore. Oh, Danny Wuerffel hasn’t played in 10 years. Oh, that guy wasn’t good enough to make the NFL.’ That’s always in people’s heads. But with the women, the game gets to stand alone and the game gets to stand alone.

“The other thing on the women’s side is that it’s already wildly competitive internationally. The U.S. women have a national team and a lot of the women from the U.S. national team will actually be in our event. They don’t dominate international competition the way the men’s team does because we don’t have the same sort of numbers advantage.”

Seeing girls play flag football for the first time really opened Lewis’ eyes to the possibilities of the sport for females. He wants it to become a worldwide phenomenon, and the decision to use equal pay iis one he feels is going to be a great long-term investment.

“I had this experience of seeing girls playing serious flag in like 10U and 12U in these tournaments recently. In my experience, I had never seen girls playing a sport where they got that sort of engagement, that sort of aggression, that sort of swagger,” he said. “It looked like when you give your kid their first piece of chocolate. Like, ‘How come I haven't had this before and why have you been keeping it from me? Like, why have you been making me play soccer when football was there?’ I think we’re about to have an explosion of interest in people playing and watching female football. Purely, it’s a selfish decision to make the decision we did because I think we’re investing in something that I think is going to be an enormously successful sport around the world.”

For those interested in the sport of flag football, the AFFL gives them an opportunity to get more involved than any other league. Through their new investment campaign on SeedInvest, fans can become equity stakeholders in the AFFL, investing in the league itself.

The goal is obviously for investors to make money, but it also helps the AFFL grow its following and build relationships with stakeholders.

“The sport has about 7 million players, according to the SFIA. That makes it as large as rugby, ice hockey and lacrosse combined,” Lewis said. “There is a massive community of people. One of the things we’ve learned past five years is how important this game is to so many different people in so many different ways. So, it struck us that it was a natural way for us to allow people to support and get involved in something that’s something important to them and a passion for them. And at the same time, we hope they have a pretty good chance to make a few bucks. It’s sort of a double positive because if we get the investment funds, it’s great, but we’ll also get this army of people who are not only financially invested, but also emotionally invested and are going to be out there for us wearing the gear, telling their friends, coming to events.

“It’s a very interesting venue for a business like ours where once people get invested, that’s just the beginning of the relationship we can have with them as partners.”

As the AFFL continues to grow, so does Lewis’ confidence in the sport’s potential. And with an up-and-coming broadcaster like Blackmon on the call for CBS Sports, interest is sure to keep spiking.