By Cameron DaSilva | Posted 9 months ago 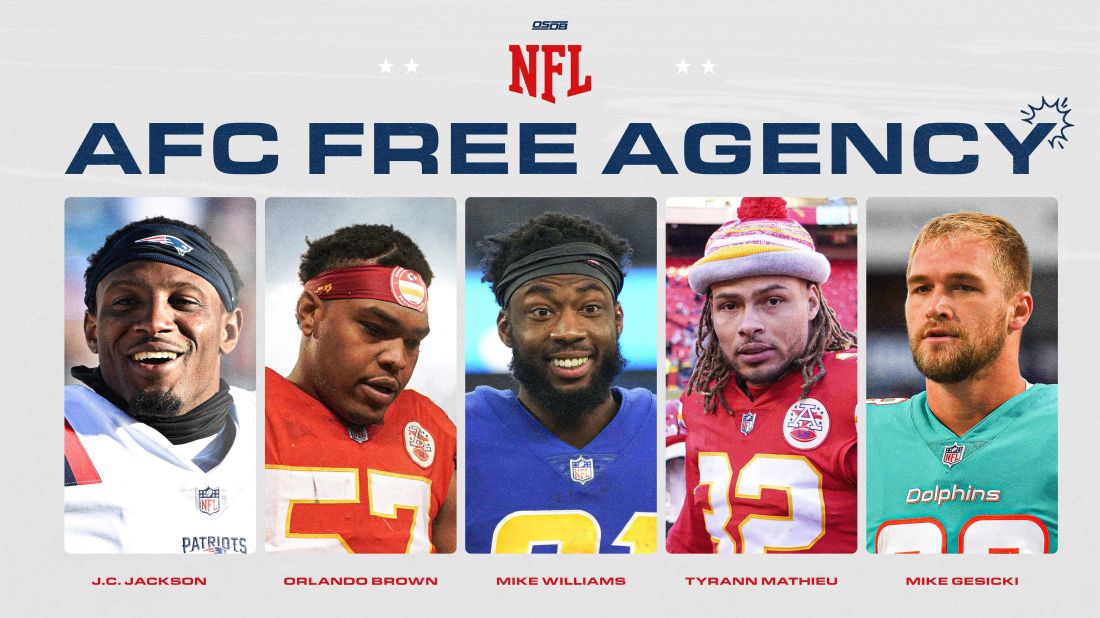 This year’s free agency crop is absent of big-name quarterbacks, but that doesn’t mean it lacks overall talent. There are still dozens of quality starters who will become available on March 16, many of whom are in the AFC.

With two weeks until the market opens for free agency, it’s a good time to sift through the long list of players whose contracts will expire soon. These are the 13 best pending free agents in the AFC, led by the Patriots’ star cornerback and Kansas City’s stud left tackle.

Jackson isn't just one of the top available free agents this year. He’s one of the best cornerbacks in the NFL, and any team that signs him is going to drastically improve its secondary. Jackson earned second-team All-Pro honors last season and was selected as a Pro Bowler after picking off eight passes and returning one for a touchdown. He led the NFL with 23 pass breakups and set career-highs with 58 tackles and two tackles for a loss.

That came after Jackson pulled down nine interceptions and broke up 14 passes in 2020. In four seasons, Jackson has 25 interceptions, the most in the NFL since 2018. He’s a certified ball hawk and those turnovers he forces are game-changing plays – and a big reason the Patriots have finished in the top seven in points allowed in each of the last four years.

The Chiefs traded for Brown prior to the 2021 season, acquiring the two-time Pro Bowler from the Ravens. That move paid off in a big way, helping remake a Chiefs offensive line that really struggled the year prior, particularly in the Super Bowl. Brown made the Pro Bowl last season, starting 19 games for the Chiefs, including the postseason.

As one of the best players at a premier position, Brown is going to get paid handsomely, especially being 25 years old. The Chiefs would love to keep him this offseason but he might garner too much interest on the open market – if they don’t use the franchise tag.

There are few teams in the NFL that couldn’t use a 6-foot-4 wide receiver who’s 27 years old and coming off an 1,146-yard season. Williams is a great fit in most offenses as a deep threat and red zone weapon, which will make him a hot commodity in free agency. Last season was his best as a pro, not only because he was mostly healthy, but because of how many plays he made down the field for Justin Herbert. Don’t be surprised if Williams becomes one of the higher-paid receivers in the game this offseason.

Mathieu took his game to another level after joining the Chiefs in 2019, making the Pro Bowl in each of the last three years and being selected as a first-team All-Pro twice. He’s picked off 13 passes in the last three seasons and made 213 tackles, starring in Kansas City’s defense as a do-it-all player in the secondary. Mathieu will be 30 in May, but with the way he’s played throughout his career, there’s no reason he shouldn’t be one of the top-paid players at his position.

Gesicki is a new-age tight end who often lines up in the slot as a receiver and does his best work there. Despite only scoring two touchdowns last season, Gesicki still had the best season of his career: 73 catches, 780 yards, 39 first downs. He’s a durable player, too, missing only one game in four seasons.

For a team that wants a 6-foot-6 pass catcher who can create mismatches with linebackers and cornerbacks as a slot receiver, Gesicki is a perfect fit. And spoiler: every team wants that.

After playing relatively well for the first three years of his career, Landry really broke out in 2021. He had 12 sacks, 22 QB hits and 14 tackles for a loss, all of which were career-highs for him en route to a Pro Bowl selection. He’s not a perfect pass rusher, but he’ll only be 26 in June and his best football is ahead of him. Whichever team signs him this offseason will be getting a talented edge defender who can apply consistent pressure on the quarterback.

Bates had one of the Bengals’ two picks in Super Bowl LVI, showing off his range in coverage against Van Jefferson. He was outstanding in 2020 as a second-team All-Pro but his play fell off last season, particularly in coverage. That shouldn’t deter teams from giving Bates a hefty contract because in the right scheme, he can be one of the better safeties in football. He just needs to shore up his tackling and get back to the way he played in 2020 when it comes to pass coverage.

Ogbah bounced around quite a bit as a former second-round pick, playing three years with the Browns followed by one with the Chiefs and two with the Dolphins. The last two years in Miami were undoubtedly his best, recording nine sacks in each year and totaling 45 QB hits – more than he had in the previous four years combined. Ogbah won’t be 29 until November and finding every-down pass rushers on the right side of 30 can be a challenge. Ogbah is a solid run defender and pass rusher so the team that signs him will be getting a well-rounded defensive end.

Maye was limited to six games last season due to an Achilles’injury but the film he put on tape over the course of his first five seasons make him deserving of a long-term deal. He has six career interceptions and 312 tackles in 60 career games, all of which he started. In today’s pass-happy NFL, he’s capable of playing deep in coverage as well as in the box, making him a well-rounded defender. There are obviously concerns about durability after he missed 11 games this past season and 10 in 2018, but he should be poised for a bounce-back year.

Clowney was shockingly shut out of the sack column in eight games with the Titans in 2020, but in his first year with the Browns last season, he had nine sacks, two forced fumbles and 19 QB hits – his most since 2018 with the Texans. He’s still a big name who doesn’t always deliver big numbers, but Clowney showed last season that he’s plenty capable of producing both as a run defender and pass rusher.

Now 29, there is some worry about his injury history and inconsistent play, but Clowney can help a defense that needs some pass-rush juice on the outside.

Little went right for Smith-Schuster in 2021. He played just five games before suffering a shoulder injury and when he did play, he was targeted a total of 28 times. Ben Roethlisberger was a shell of himself and couldn’t throw the ball downfield, which caused Smith-Schuster’s route tree to feature an abundance of short crossing routes – not necessarily his forte.

With a capable quarterback, Smith-Schuster can still be productive, even with his middling numbers the last three years. Don’t forget, he had 2,343 yards in his first two seasons.

Things didn’t work out for Ingram in Pittsburgh, so the Steelers released him after six games. He went on to play 12 games with the Chiefs, recording four sacks and eight QB hits in those appearances with Kansas City. Even at nearly 33 years old, Ingram was an impactful player with the Chiefs and showed he can get after the quarterback as a situational pass rush.

If health, Ingram could be in for another season with seven-plus sacks in 2022.

Campbell might be 35 years old, but he’s shown time and time again that he is still a valuable player to have on the defensive line. With the Ravens last season, he had 1.5 sacks and 49 tackles, hitting the quarterback 12 times. It was his first season without a Pro Bowl or All-Pro selection since 2013, but he still played a big role in the Ravens ranking first in rushing yards allowed. Another one-year deal should be in the cards for Campbell this offseason.