Page: Evolution of the Superstar Wide Receiver in the NFL and Why We Love Them 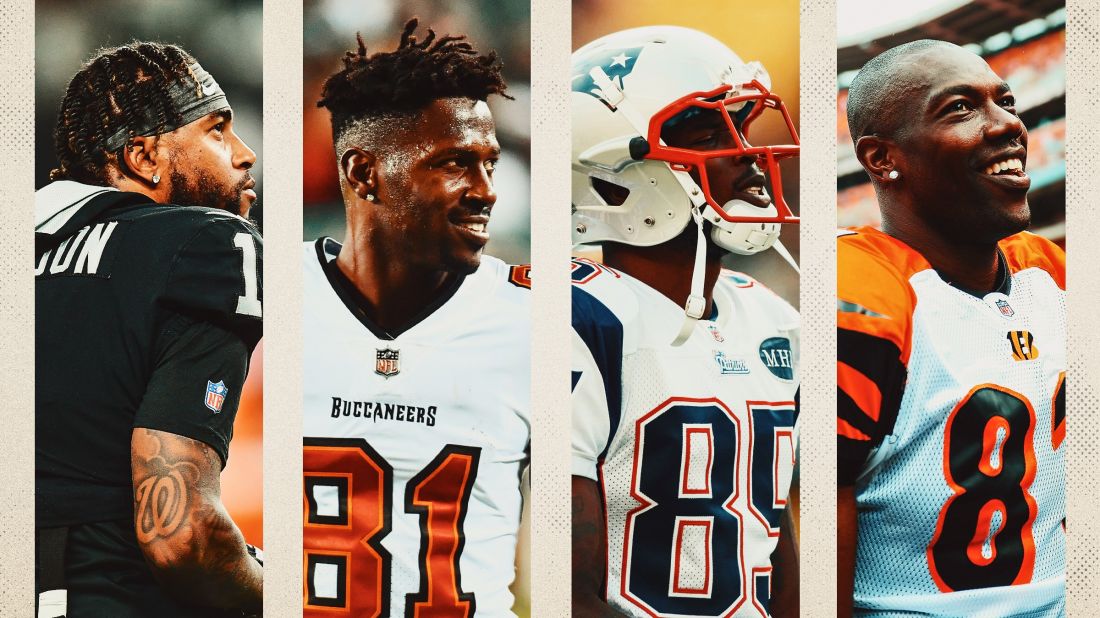 The NFL’s center stage has featured many notorious superstars over the years, and most of them have played wide receiver. They demand the ball. They demand attention. They throw tantrums, talk trash, and often provide us with epic entertainment. Let’s not forget the glorious end zone celebrations.

Three of the prominent stars in the game today have recently caused a ruckus and changed teams: Odell Beckham Jr. (OJB), DeSean Jackson (D-JAX), and going a little farther back, Antonio Brown (AB). Before delving into the modern-day drama, let’s briefly reflect on the history and evolution of the wide receiver. These powerful personalities are always putting on a show, both on and off the field.

The first legit diva prototype to grace the gridiron at wideout was Michael Irvin. The Dallas Cowboys selected Irvin with the 11th overall pick in the 1988 NFL draft, and the former Miami Hurricane swept the organization up for a wild ride.

Irvin took trash talking and showboating to a whole new level, even going so far as to name himself “The Playmaker.” Over the course of his 12-year career in Dallas, Irvin set franchise records for receptions (750) and receiving yards (11,904) while scoring 65 touchdowns. “The Playmaker” rumbled and high-stepped his way to three Super Bowl victories, barking at his opponents at every opportunity.

Irvin has proven himself to be a colorful sports commentator, and has dabbled in Hollywood productions. “The Playmaker” made a cameo appearance in Jerry Maguire in 1996, and played Deacon Moss in the 2005 prison comedy The Longest Yard. Irvin’s infectious personality beckons for the camera. Irvin cemented his diva designation when he partnered with Anna Demidova in 2009 on Dancing with the Stars season 9. Demidova and Irvin danced themselves to a seventh-place finish.

One unique caveat about Irvin is that he played his entire career on one team. None of the other receivers on this list can claim that badge of franchise loyalty.

Andre “Bad Moon” Rison came along soon after Irvin. Rison was chosen by the Indianapolis Colts with the 22nd overall pick in the 1989 NFL Draft, but it was his playing days in Atlanta that made him infamous. Everyone remembers the fist fight that Rison had with ex-Falcon and former teammate Deion Sanders, when Sanders’ San Francisco 49ers traveled to Atlanta in 1994. It was Sanders’ first trip back to Atlanta since signing with San Fran, and the stars mixed it up in a true Battle of the Divas in the second quarter. Surprisingly, neither was ejected. Both did get fined.

Rison went on to catch a total of 743 passes for 10,205 yards and 84 TDs while playing for a total of seven teams. “Bad Moon” secured a Super Bowl ring with the Green Bay Packers in 1997, catching a 54-yard TD pass from Brett Favre to ignite the scoring vs the New England Patriots.is among the nominees for the Pro Football Hall of Fame’s class of 2022.

Terrell Eldorado Owens, AKA T.O., was the first modern-day outspoken wideout to consistently criticize his quarterbacks and coaches. Owens was picked by the San Francisco 49ers in the third round (pick 89) of the 1996 NFL Draft, and rapidly rose from the ranks of the relatively unknown to become a dominant force in the league. However, T.O. was quick to play the blame game when it came to errors and losses that were suffered along the way.

T.O. tallied 1,078 receptions for 15,934 yards and 153 TDs over his embattled fifteen-year NFL career. Only fellow receiver Randy Moss and the GOAT Jerry Rice have more receiving touchdowns than Owens in their careers.

T.O. played for a total of five teams, only reaching the Super Bowl once. Owens’ Eagles squared off against the Patriots in Super Bowl XXXIX, and Philadelphia relished the underdog role. T.O. caught nine balls for 122 yards, but it was another wide receiver who won Super Bowl MVP on February 6, 2005.

New England’s Deion Branch hauled in 11 passes for 133 yards, and the Patriots won 24-21. Owens missed his opportunity, but it wasn’t due to lack of heart or commitment. The man defied medical science by returning to play seven weeks removed from a broken leg and torn ligament in right ankle. Owens was not cleared to play by his doctors, and they thought he was completely insane to even consider playing.

T.O. was one of the most talented wideouts to ever play the game, yet he never translated that into a Super Bowl ring. Fans and haters alike picture T.O. standing on top of the Dallas Cowboys’ star logo at midfield after scoring a touchdown, or stuffing the inside of his helmet with popcorn.

Owens was eventually enshrined into the Pro Football HOF on Aug. 4, 2018, but didn’t attend his own induction ceremony. T.O. was snubbed by the HOF voting process during the first two years he was eligible, so he had a legitimate beef with the hallowed halls of Canton. Owens held his own ceremony on the UT-Chattanooga campus, delivering an acceptance speech of sorts to a crowd of about 3,000 people. Classic T.O.

Not to be outdone by Michael Irvin, T.O. competed in the 25th season of Dancing with the Stars in 2017. Owens paired with Cheryl Burke and the duo fought hard for a sixth-place finish.

The Dancing with the Stars connection here is remarkable. Chad “Ochocinco” was still playing football when he partnered with professional dancer Cheryl Burke for season 10 in 2010. Ochocinco and Burke waltzed their way to a fourth-place finish, best among the aforementioned wide receiver divas so far.

Johnson legally changed his last name to Ochocinco in 2008, wanting to attract more attention while doing something novel. Ochocinco was an end-zone celebration master, always craving camera time. Johnson has putted a football with a pylon, performed CPR on a pigskin, proposed to a cheerleader, and donned a yellow mock Future Hall of Famer jacket to celebrate scores. Ochocinco’s Riverdance was the jig that took the cake for this Irishman. Johnson oozed creativity and talent, and often had us on the edge of our seats waiting to see what he’d do next.

Over the course of his 11-year career, Ochocinco reeled in 766 passes for 11,059 yards and 67 TDs. Johnson almost stuck with the same team for the duration, but jumped ship from the Cincinnati Bengals to the New England Patriots for his final season in 2011. Like Owens, Johnson played in one Super Bowl and he was on the losing end of it.

The New York Giants upset the Patriots 21-17, shocking Bill Belichick’s squad in the big game for the second time in five years. Ochochinco caught his lone target from Tom Brady in Super Bowl XLVI, logging 21 yards. Ochocinco retired and soon changed his last name back to Johnson. The show was over for number 85. Or was it?

Johnson, 43, made his boxing debut on June 6 of this year on the Floyd Mayweather/ Logan Paul fight card. Ever confident and trying new things, Ochocinco went cuatro with MMA fighter Brian Maxwell before getting knocked down. Both fighters went the distance, and no winner was named since it was an exhibition bout. Johnson’s performance was impressive, and the ex-receiver definitely held his own.

Johnson, like Rison, is one of the 122 nominees for the 2022 Pro Football HOF class. Another honorable mention receiver, Steve Smith, is a first-time nominee. The elite list of 122 nominees will be narrowed down to 25 later on this month.

In recent years, AB has been the most outspoken wide receiver  in the league. Despite his immense talent, Brown was almost untouchable for potential suitors following his ugly breakup with the Pittsburgh Steelers organization. AB was drafted by Pittsburgh in the sixth round (pick 195) in 2010 and quickly became an elite wideout. Brown enjoyed nine extremely successful seasons with the Steelers, but was benched in late December 2018 by head coach Mike Tomlin after causing all kinds of locker room disruption.

The Steelers traded AB to the then Oakland Raiders in March of 2019, and the Raiders almost immediately made Brown the highest-paid receiver in the NFL. Brown’s three-year deal was inked for $50 million.

However, the 50-million-dollar man never even saw the field for the Raiders. A series of training and uniform issues, missed workouts, and verbal bashings towards Oakland GM Mike Mayock led to Brown’s release on Sept. 7, 2019. AB was scooped up right away by the New England Patriots. Brown played in one game for the Patriots, catching four passes for 56 yards and a touchdown.

Brown found himself a wonderful landing spot in Tampa Bay. AB’s infinitesimally short tenure in New England must have been enough to make an impression on Tom Brady. Despite head coach Bruce Arians’ public statement that Antonio Brown was "too much"  to pursue (Arians had been the Steelers’ OC for two years during the AB’s stretch in Pittsburgh), the Buccaneers signed him on October 23, 2020.

The story has had a happy ending so far, and AB won a Super Bowl in his first season with the Bucs. As of this writing, Brown has 915 receptions for 12,164 yards and 83 TDs and Champa Bay is eyeing another Super Bowl run with Brady at the helm.

D-Jax and OBJ have had their names splashed all over the sports pages and fantasy chat rooms as of late, and they each have new teams. Jackson wasn’t getting much action with the Los Angeles Rams’ offense, so he pushed hard to be released or traded. With WR Cooper Kupp’s MVP-caliber season, and so many other targets getting gobbled up by WR Robert Woods and TE Tyler Higbee, there were just too many mouths for QB Matthew Stafford to feed. D-Jax wanted out of the Rams’ SB run, so he could play for a different contender where he’d be more involved in the offense.

The Rams acquiesced, and soon after D-Jax was scooped up by the Las Vegas Raiders. Jackson was meant to replace second-year WR Henry Ruggs III, who had just been arrested for a fatal driving accident he had while allegedly under the influence. D-Jax was to be the viable deep threat that Derek Carr needs at his disposal.

Jackson had his Raiders debut on Sunday night, and he did catch a deep pass from Carr. The problem is, after making the 38-yard grab, D-Jax had the ball punched out by the Chiefs’ Rashad Fenton. Jackson had fumbled his first catch as a Raider, and he would not be targeted again, Kansas City 41, Las Vegas 14.

Meanwhile in Los Angeles, there was a twist of irony taking place. The same congested offensive situation that D-Jax had forced his way out of with the Rams, is the one that OBJ chose to drop himself into. Remember that Beckham had also demanded to be traded or released from the Cleveland Browns so that he could sign with a team that would throw him the ball. OBJ’s father publicly trashed Cleveland QB Baker Mayfield and that seemed to be the final straw to break the Browns’ backs. Beckham was released and became the hottest topic in NFL circles. Would OBJ join the Packers? Perhaps the Saints, or the Patriots? The Chiefs could always use another weapon for Patrick Mahomes. The Rams didn’t seem to be in the discussion.

OBJ shocked the sports world by signing with the Rams, another team overflowing with offensive weapons, but a squad with a serious shot at winning a championship now. Then out of nowhere, Robert Woods tears his ACL and is out for the season. All of a sudden, OBJ looks like a savvy swami who knew a spot would open up for him. The life of a superstar receiver is never a dull one, and the show must go on.