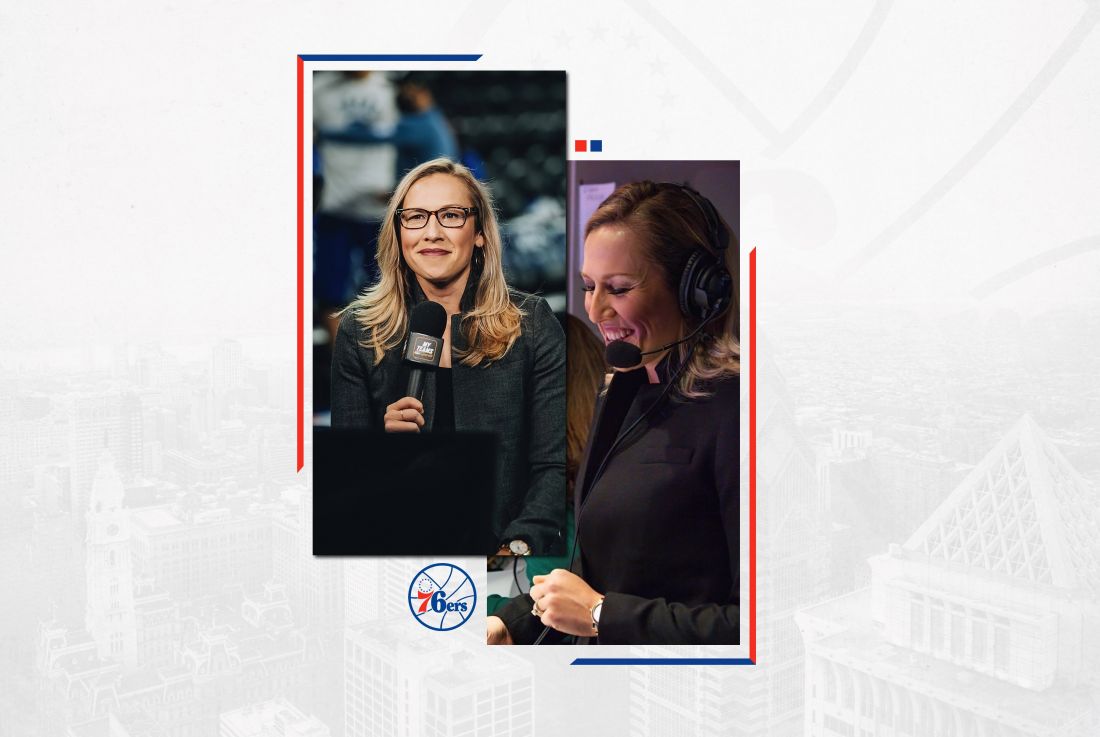 When Kate Scott heard that long-time Philadelphia 76ers play-by-play man Marc Zumoff announced his retirement at the end of June, the talented broadcaster who was gearing up to call Olympic basketball games had one thought.

“When I saw that he retired — because nobody knew it was happening —I said, ‘Man, whoever tries to follow ‘Zoo’ is a freakin’ idiot!’” Scott. Told OSDB Sports recently “And then about two days later, my agent called and said, ‘Hey, we think that you should apply for the Sixers opening.’

“So, I need to get a shirt that has the arrow pointing up and instead of ‘I’m with Stupid,’ it just says, ‘I Am Stupid.’”

Scott was hired to be the voice of the 76ers’ television broadcasts on NBC Sports Philadelphia toward the end of September, joining Lisa Byington of the Milwaukee Bucks as the first two women to be full-time TV play-by-play broadcasters for a major men’s professional sport.

In addition to sharing her instant reaction to Zumoff’s retirement and the subsequent irony that followed with me, the 38-year-oldtold the story to the man she’s taking over for in Philadelphia a couple days after her hiring was announced.

They met for lunch, which turned into a three-hour hang that nearly resulted in a car being towed, and capped it with a picture. Scott had asked to take the “usie” so she could tweet it out — the new kid wanting to show everyone that she had sought the counsel of the departing legend — but Zumoff beat her to the punch.

“I did not expect him to send that tweet,” she said of the photo that sits pinned to Zumoff’s Twitter feed, the pair smiling, his arm around her shoulder, with a caption that reads, “Torch handoff complete. With Kate Scott you’re in great hands Sixers fans!”

It was a class move from a first-class individual, and someone that knows how important his endorsement of Scott would be with an audience that had spent the previous 27 seasons listening to him call games on the local network.

“I asked him if we could take a picture so I could send it out, so the fact that he sent out a tweet supporting me?” continued Scott, pausing momentarily, the impact and importance of Zumoff’s tweet still sitting powerfully with her. “He gets all this — how him blessing me as the next person, how much that matters.

“I thought that whoever followed him would be the stupidest person, but now being here, I don’t think I could be taking the baton from a more humble, wonderful person, who I know is going to be a mentor and a friend for the rest of my life.”

In addition to getting the Zumoff seal of approval, Scott quickly endeared herself to ravenous Philadelphia sports fans on social media by doing all the things you’re supposed to do when you’re the new kid in town: she posted a picture of her dog, Piper, sporting a 76ers bandana on Instagram, and one of her enjoying a Philadelphia Pale Ale on Twitter, adding “Oh and DALLAS SUCKS!!!” for good measure.

She also roasted former Phillies outfielder Lenny Dykstra in a quick, one-sided exchange that instantly had folks in “The City of Brotherly Love” falling for the new voice of the 76ers.

“That was too easy,” Scott laughed when asked about the exchange with Dykstra, who was tagged into a thread announcing Scott’s hiring by some random.

“I was like, ‘Thanks for putting it on a tee for me, Lenny; I appreciate you,’” she said still laughing at the exchange and the coverage it received. “I’m surprised how much run that has gotten, but I’m thankful for it.”

While she’s enjoyed playfully pandering to her new audience and the initial positive interactions she’s had with the fan base famous for booing Santa Claus and hurling batteries at opposing players, Scott knows there will be periods where those interactions won’t be so positive, and she’s ready for it.

“I’m sure once they hear me call a game, I’ll say something wrong six games into the season and they’ll be like, ‘BLANK her! Where’s ‘Zoo?’ We want him back!’” Scott said, only partially joking. “But everything that everyone told me was that it was a tough, passionate town, but if you love them, and you love the team, they’re gonna love you back.

“I’m not going to try to fill (Zumoff’s) shoes, because there is no way you can,” she added. “I’m just going to be myself, love the Sixers, and love this town.

“I know there are going to be bumps along the way and I’ll make mistakes, but that all the negative feedback that comes, it all goes back to love — the fans here love their teams and announcers so much that when you do good, they’re going to say they’re your best friend, and when you don’t, they’re going to call you out on it.”

Scott called her first preseason game with her broadcast partner Alaa Abdelnaby on Oct. 7, and Twitter lit up with praise and support.

While there were surely nerves about going live for the first time in her new gig, this was far from the first time Scott broke a barrier in her broadcasting career, and the combination of all those previous firsts and knowing she was truly ready for the challenge ahead made it all easier.

“I think as with any experience, the more times you experience something, the more ready you are when it happens again,” began Scott, who was the first woman to call a Golden State Warriors game, the first to call an NFL game on the radio, and football for the Pac-12 Network, amongst several other glass ceiling-breaking assignments and opportunities. “Back in 2016 when I called a couple of 49ers pre-season games, it was beyond overwhelming because there is so much added attention because of who you are, and there are a lot of people hoping you fail — and there’s a lot of people on the flip side really hoping you succeed for them, for their kids, for so many reasons.

“It’s not just a new person with a job; there are so many added layers to it,” she continued. “So, no doubt, all the firsts that I’ve been fortunate to experience before prepared me for this, because now that I’m here, I finally feel like I’m supposed to be here, and that’s not something that comes easily.

“I think a lot of us, in whatever industry we’re in, we’re always impatient,” added the former seventh grade hoopster and self-described “Charge Machine” who has also called hockey and soccer, and holds ambitions of crafting a Mike Tirico-esquecareer for herself. “We think we should have a certain job before we’re ready for it, but in our hearts and heads, we’re ready for it. ‘Why am I not getting a promotion?’”

Scott paused, again allowing the heft of the thought she’d shared — one that most people can easily identify with — to have its moment.

“Sitting at Sixers training camp and practice yesterday — looking down at the floor, talking with my partner Alaa — I just had a moment where I thought, ‘No, this was supposed to happen right now,’” she said. “I needed to go through two-and-a-half weeks of calling Olympic basketball games at four in the morning, off a monitor, in Stamford, Connecticut, with Fran Fraschilla. I needed those experiences and those games to feel as confident and ready as I do today.”

The last few years have seen female broadcasters and analysts getting increased opportunities and exposure, with ESPN’s Doris Burke becoming an NBA Twitter favorite (and rightfully so) and Sarah Kustok becoming the first full-time analyst for an NBA team’s local television broadcasts in 2017 when she joined Ian Eagle on the call of Brooklyn Nets games on the YES Network.

There have been all-female broadcasts of different sports on both ESPN and TSN in Canada, more women are occupying analysts roles, from Mina Kimes on NFL Live to Laura Sanko on the UFC’s Contender Series events, and in general, the makeup and complexion of sports broadcasts are clearly changing, with many seeing this current group as the first wave of female voices getting an opportunity to prove themselves.

Scott sees herself and her contemporaries as the second wave.

“I have always said that even though it appears that we are the first wave, I actually think we’re the second wave,” began the talented broadcaster. “Pam Ward and Beth Mowins and Gayle Sierens, Nancy Lieberman when it comes to basketball, Ann (Myers) , and Doris — I consider them the trailblazers.

“They’re the firsts, but there were just so few of them and their opportunities were so spaced out that a lot of people are looking at us as the first. I consider them the ones that cracked open the door.”

Now that the door is open, Scott sees herself serves as kind of a reverse Hodor from Game of Thrones, tasked with prying that door wide open and making it so that others can find their way to these types of opportunities without having to navigate as many roadblocks, detours, and hurdles.

And it’s not a responsibility she takes lightly.

“I know Lisa and everybody else that is getting an opportunity right now, we know it’s our job to just hold the door and it’s just, ‘Everybody — come on through!’” Scott said. “For the majority of our lives so far, yours and mine, it’s been white men calling all of the sports, and understandably because that’s who was playing them for the longest time.

“But now, the athletes and student athletes are starting to look different, and the fans are starting to look different, and the broadcast should reflect that when people are ready. The fact that it has and appears to be opening the ears and minds of the people that do the hiring, and thus opening doors for other people that haven’t seen themselves reflected in broadcasting before, I take that responsibility very seriously and it’s one of the reason I put as much passion and energy and effort into what I do because I know this is about more than me.”

While her wife is excited because Scott calling one sport might mean the two of them can actually book a proper vacation for once, the NBA broadcast rookie is thrilled to have landed in one of the marquee markets in the league, covering one of the most intriguing teams of the last several years — one that has been in the spotlight for the entire offseason and should remain there for the foreseeable future.

“When I think of the NBA as a little kid, there’s five or six teams,” she began. “There’s the Sixers, the Celtics, the Knicks, the Lakers. I’m an ‘80s kid, so throw the Bulls in there because of MJ and winning a ton of titles, but this is one of the franchises in the league, and to be coming into a young, exciting team like I am?

“I could not have asked for a more exciting franchise to land with right now because they are so young and hungry, but have this incredible history when it comes to the NBA and basketball.

“I’m pinching myself every day right now, man, because an NBA job is one thing, but an NBA job with the Sixers, where they are right now as a team, I’m just really excited to get started.”

The Philadelphia 76ers wrap up their preseason on Friday night in Detroit against the Pistons, and begin the 2021-22 season on the road in New Orleans, against the Pelicans on Oct. 20.