By Stefan Bondy | Posted 21 days ago 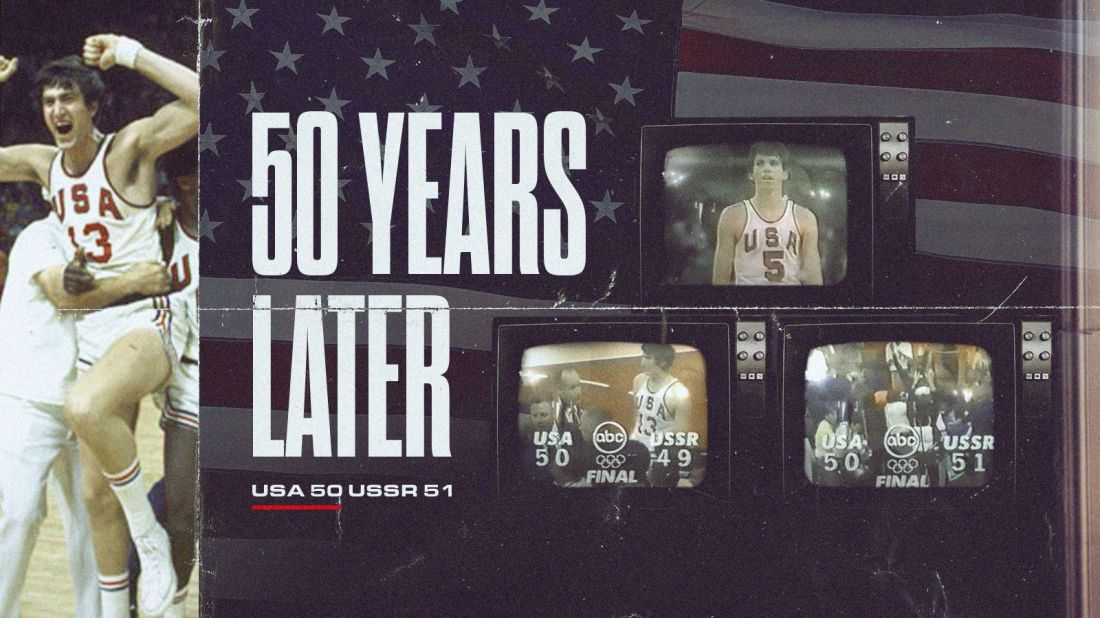 In Russia, the team that won its championship through bogus means, perhaps even corruption, is celebrated as heroes with a popular blockbuster movie.

And what about those American players who were cheated out of gold medals? They were again passed over by the Naismith Hall of Fame after getting nominated for the 2022 class.

McMillen says the Hall of Fame snub was a missed opportunity for poignancy.  Beyond Friday representing the 50th anniversary of the controversial final, there’s also renewed tension with Russia following Vladimir Putin’s invasion of Ukraine.

McMillen, who was an elected U.S. Congressman and now runs a student-athlete advocacy firm called Lead1, can understand the symbolism.

“I think it’s particular poignant because of the whole Ukrainian situation and our difficult relationship with Russia,” he says.

Priorities were different for McMillen and his teammates in 1972. There was a lot on the plate of the young Americans, who carried neither the time nor capacity to process the geopolitical stakes of a Cold War basketball showdown.

It was a hectic and frightening time.

Four days before the final, their Olympic Village in Munich fell under attack. A hostage crisis orchestrated by eight Palestinian terrorists ended with a massacre that left 17 people dead, including 11 members of Israel’s Olympic team.

McMillen says his team walked out for practice in the morning and witnessed the masked terrorists on the apartment balcony.

“It was kind of surreal. Terrorism hadn’t really emerged around the world. It was not a common-day terminology. And here it had invaded this Olympic Village. People had called it the start of modern terrorism,” McMillen said. “So, we got up that morning, we see these terrorists. They’re wearing covers on their face. They were on a balcony. We had to practice and get ready for the game. It was sobering but we still had to continue and persevere.

“The village was really strange because you could see these German police running around in sweat suits with machine guns. They didn’t know what could be involved here. Could this be a broader attack on the village or whatever? It was so new, pretty frightening.”

Back then, McMillen thought the Games should’ve been canceled on account of terrorism. Now he supports the decision to continue.

“Some of us talked about (not playing in the final game). Personally, I was of that feeling. I thought this was terrible,” McMillen said. “Then over the years I’ve changed my mind because the precedent of canceling an Olympic Games because of a terrorist attack would’ve been terrible. And, so, I’m glad they persevered and kept it going. I think it would’ve been a mistake to cancel.”

The game went forward and will forever be shrouded in controversy.

The Americans were favored because of their superior talent and historical dominance, but the Soviets held a key advantage. They were older and breached the Olympics amateur requirements, while the U.S. was formed with strictly college-level players and little time to prepare.

The U.S. coach, Henry Iba, installed an outdated game plan of demanding at least three passes per possession before attempting a shot, which negated the athletic advantage the Americans held in the open court.

Still, the U.S. squad, led by Doug Collins, recovered from a 10-point deficit with 10 minutes remaining. It set up the wild finish of restarts, referee mistakes, outside interference and confusion that only benefitted the USSR.

Collins, the future No. 1 pick in the NBA by the Philadelphia 76ers, should’ve won the game after his steal and two free throws gave the U.S. a one-point advantage. But with the help of a British FIBA official, Renato William Jones, who climbed out of the stands to order more time on the clock, the Soviets were provided three chances at a final inbounds.

A formal appeal from the U.S. was denied.

According to a 2012 Bloomberg story, Jones was “bestowed gifts” from the Soviets about two months before the Olympics.

In 2017, a film about the Soviet victory, “Going Vertical,” became the highest-grossing modern Russian film of all-time.

“There were three Eastern Bloc countries that voted against (our appeal). So, it was ordained,” McMillen told OSDB. “The Soviets were going to try to win this any way they could.”

McMillen and his teammates never accepted their silver medals. Their side of the podium was empty in Munich.  McMillen believes the medals are collecting dust at the IOC headquarters in Switzerland, and he attempted to import them to the U.S. last year.

The offer was rejected by the IOC because, according to McMillen, the organization requires the entire team accepts the medals. That’s never going to happen.

“The sad part is that after this anniversary, those medals are still going to be sitting in a vault in Switzerland,” McMillen says.

Fifty years later, the unwanted medals are still in Switzerland and the Hall of Fame missed a chance to celebrate the real champs.

“Now you look 50 years later and we’re in a Cold War with the Russians, and I think of the poignancy of it, about the hypertensions between the two countries,” McMillen says. “Does it gnaw at me? Every five years it does.”