By Cameron DaSilva | Posted 24 days ago 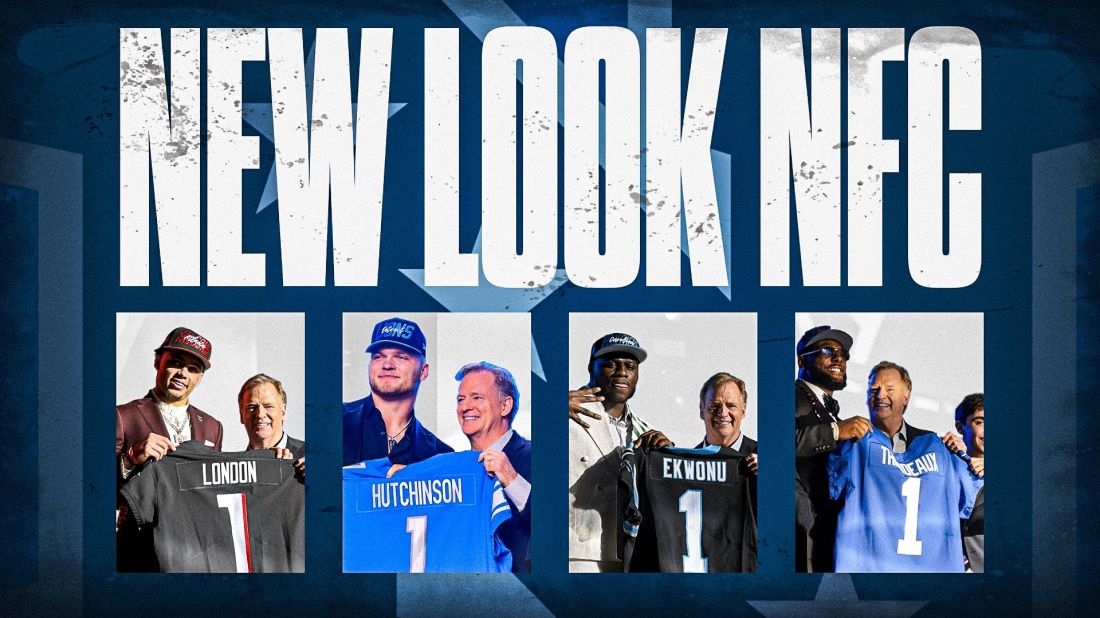 Leading up to the 2022 NFL draft, there was a lot of uncertainty with this class. There were questions about the quarterback group and the overall quality of the first-round prospects, but there were nine trades on Day 1 and six wide receivers were taken in the top-20, which were the biggest storylines of the night.

On Day 2 and 3, teams found great value in what was viewed as a deeper class in the third and fourth rounds, rather than a top-heavy class in Round 1. Filling immediate needs while also not reaching for players is a challenge, but it’s also what makes the draft so much fun.

So how did each team in the NFC do? We ranked them in three tiers: The Good, The Average and The Ugly.

The Falcons addressed arguably their biggest need in Round 1, taking London to give Marcus Mariota a promising young target to go with Kyle Pitts. Their selections of Ridder and Malone look like good values, too, with Ridder potentially becoming the starter in 2023. Ebiketie will help provide a spark to one of the league’s worst pass rushes, too, once again filling a big hole for the Falcons.

The Panthers didn’t take the bait and reach for Kenny Pickett or any other quarterback at No. 6 overall, which was the right move. Instead, they took arguably the best offensive lineman before selecting a quarterback in the third round at No. 94 overall. Corral could wind up being the best quarterback in the class, too. Barno is an athletic freak who shouldn’t have slipped to the sixth round, while Barnes has rare speed for the cornerback position.

Hutchinson fell in the Lions’ lap at No. 2 overall after the Jaguars shockingly took Travon Walker first in the draft. The Lions then made a huge trade up for Williams, once again building around Jared Goff instead of taking a quarterback to replace him. Joseph was a fantastic pick in the third round, and Paschal has great versatility across the defensive line, showing the ability to line up almost anywhere.

It was a huge haul for the Giants in this year’s draft, and a targeted one. They added three offensive linemen, two linebackers and an edge rusher, as well as a potential starter at cornerback in Cordale Flott. With the Giants’ first four picks, there’s a good chance all of them will become starters early on as rookies. The tandem of Thibodeaux and Neal was a sensible and smart one for the Giants to come away with.

The biggest move Philadelphia made was the acquisition of A.J. Brown, who they traded a first- and third-round pick for on Thursday night. He makes the Eagles’ class a great one, as does Davis – the best interior defender in the draft. Dean fell much farther than most expected, but he’ll be an early contributor on defense for the Eagles. Jurgens received rave reviews from Jason Kelce, who he should replace in 2023.

The Packers took advantage of having two first-round picks by double-dipping on defense, taking two Georgia standouts to help solidify that side of the ball. Walker is a freakish athlete and Wyatt pairs nicely with Kenny Clark. The Packers then added a weapon for Aaron Rodgers by selecting Watson at the top of the second round, and then bringing aboard another one (Doubs) in the fourth round. Ryan, Doubs, Tom and Enagbare all look like great mid-round values and could contribute early on.

As a whole, the Cardinals’ class looks pretty good. Luketa is an intriguing defender who lasted until the seventh round, and Hayes was expected to go much earlier than he did. What I didn’t like from the Cardinals’ moves in the draft was their decision to trade a first-round pick for Marquise Brown, who’s in the final year of his contract. That knocked their grade down a tier, even knowing DeAndre Hopkins will now miss six games.

The Bears did well to turn their six picks into 11 by trading back, stockpiling selections to round out their roster. That alone makes this a better class than expected. And they got off to a good start by taking Gordon and Brisker in the second round – two immediate starters and two of the better defensive backs in the class. Robinson also has a chance to start early on. VelusJones is an older rookie at 25 years old, but he’ll contribute right away as a receiver and punt returner.

The Rams were already behind the eight ball after trading first-, second- and third-round picks for Matthew Stafford and Von Miller last year, so their initial selection came at No. 104 overall. They addressed their two biggest needs right away with Bruss and Durant, who could be Day 1 starters. Kendrick is a good value in the sixth, and Williams gives Sean McVay another playmaker in the backfield.

Cine snuck into the first round as one of the best safeties in the class, and he’ll immediately make an impact in the secondary for new coach Kevin O’Connell. Booth shores up the cornerback position, and Ingram looks like he should be a future starter either next season or the following year. Asamoah is a do-it-all, playmaking linebacker who can rush the passer and drop back into coverage as an off-ball defender.

Jackson was a good value near the end of the second round, but then the 49ers took another running back with Davis-Price in the third round – hardly a position that needed to be addressed early on. Gray’s speed should get him on the field often as a rookie, and Burford adds depth to the offensive line, being able to play either tackle or guard at the next level.

Cross was a rock-solid pick at No. 9 overall, giving Drew Lock protection on the edge. Where the Seahawks went wrong was passing on Malik Willis multiple times, particularly in the third round when they could’ve had him at No. 72 overall. They made up for it with Bryant, Woolen and Smith, all of whom were great selections on Day 3. Bryant and Woolen were among the favorite cornerbacks in this class and to get them on Day 3 is excellent value.

Hall fills a need on the interior of the defensive line, especially with Ndamukong Suh still being a free agent. Goedeke and Otton will help as blockers next season, and Otton has the potential to be Rob Gronkowski’s replacement at tight end. McCollum was a steal in the fifth round, making this draft class even better for Tampa Bay.

The Cowboys strategically filled immediate needs with their first four picks, even if their choices in prospects weren’t perfect. Smith committed 16 penalties last season, which was coincidentally a problem for the Cowboys all year, too. Williams has off-the-field red flags stemming from a sexual battery arrest, but Dallas seems confident that he’s learned from his mistake. Tolbert and Ferguson are good values, while Clark could wind up being a steal once he returns from injury, likely in 2023.

The Saints moved up five spots to secure Olave, giving up a third – and fourth-round pick. That was after making a puzzling trade with the Eagles to land the 16th and 19th picks by giving up first- and second-rounders next year. Penning doesn’t seem like a great value at No. 19 overall, and as a whole, the Saints came away with just five players, while also being short on picks next year, too.

Dotson felt like a reach at No. 16 after trading down five spots, especially with Treylon Burks on the board. Mathis should’ve gone later than he did, too, while Robinson is a nice complement to Antonio Gibson, being the physical runner that he is. This class could wind up being a really good one if Dotson and Howell turn out to be quality NFL players.