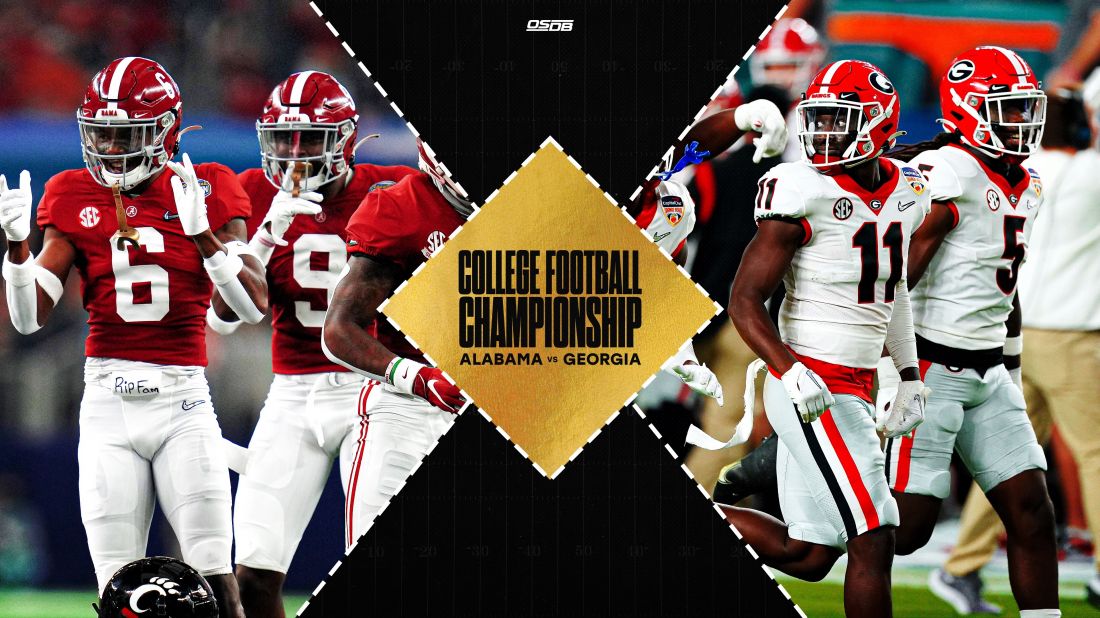 Even if you did not want it to happen, it would be naive to say that you didn’t see it coming. The rematch between the top-ranked Alabama Crimson Tide (13-1) and the third-ranked Georgia Bulldogs (13-1) seemed inevitable since the CFP committee announced the seeding for the playoffs. New Year’s Eve went as expected as the two SEC teams similarly dominated their opponents – with stellar defense.

It’s a typical matchup of powerhouses on opposite sides of the ball. The Crimson Tide are ranked fifth in the nation in total offense with an average of 494.6 yards and are scoring 41.1 points per game, which ranks fourth. The Bulldogs are the clear No. 1-ranked defense in the nation. Georgia has allowed a nation-low average of 9.5 points per contest, keeping opponents under 14 points in 12 of their 14 games.

No. 1 Alabama Crimson Tide vs. No. 3 Georgia Bulldogs

How to watch: ESPN and ESPN App

For the Tide, it starts and ends with their coach, Nick Saban, who is making a strong case for the greatest college football coach of all time. Alabama is appearing in its sixth national championship in eight College Football Playoffs and ninth over the past 13 years. Saban has won a record seven national championships, including six at Alabama, and aims for back-to-back titles for the second time with the Crimson Tide (2011 and 2012).

Saban's teams have made the CFP in seven of eight years and have won six straight CFP semifinal games by double digits. He's 178-24 at Alabama and 9-2 against Georgia. And in true GOAT fashion, he boasts a 25-1 record against his former assistants. The 11-year-streak ended this year when Jimbo Fisher's unranked Aggies upset No. 1 Alabama in College Station, 41-38.

Smart, a former All-SEC safety for Georgia has done a fantastic job putting his alma mater in the national spotlight. The Bulldogs who never reached the BCS championship game have made the national title game twice in the past four seasons. He led his team to an SEC championship in his second season and has captured East Division titles in four of the past five seasons. Smart has been a great success and has done almost everything but beat Alabama – the former Alabama assistant from 2007 to 2015 is 0-4 against the Tide.

How did we get here?

The Crimson Tide have received a lot of criticism because they have not been able to live up to the ridiculously high standards many people expect out of Tuscaloosa. The offensive and defensive lines were nowhere near as dominant as they have been in years past and many people expected the fall from the top this year. Alabama’s coveted rushing attack that has made them historically so great was nowhere to be found.

But as great teams do, they found ways to win and continued to get better throughout the season. The Tide flipped the script just in time for the SEC title game, lighting up a historically good Georgia defense for 41 points and 536 yards.

Alabama's defense and rushing attack was the story in the Cotton Bowl against Cincinnati. The Crimson Tide forced five three-and-outs and only two drives of longer than 6 yards. The Tide rushed for over 300 yards – led by RB Brian Robinson Jr.’s career day.

After a 10-3 win over Clemson in the opening game of the season, the Bulldogs’ defense became the story of the 2021 season. Georgia recorded three shutouts and never allowed more than 17 points in the regular season. Their 0.36 points per drive allowed in the regular season is comfortably the best mark since the stat started being kept in 2008.

Jordan Davis is the anchor of the defense, winning the Outland Trophy (the nation's best lineman, offensive or defensive) and the Bednarik Award (the nation's best defensive player). Davis became just the third player ever to win both awards and the first in the SEC. Davis and the Bulldogs front-seven are considered by some the greatest unit ever assembled in college football.

Georgia was never threatened until the SEC title game, which it led 10-0 before being outscored 41-14 in the final three quarters. The Bulldogs responded well to their only loss and jumped out to a 17-0 lead on Michigan that extended to 27-3 by halftime of the semifinals.

The 2021 Heisman winner and possibly the best QB to play at Alabama got better as the season went on. Alabama’s QB was the key in the first matchup between these teams when he torched Georgia’s defense for 421 passing yards and four total touchdowns to supercharge his Heisman win.

The sophomore QB has a quick release and great accuracy with the football. He is most dangerous when he escapes the pocket and extends plays with his legs. The Bulldogs are going to do their best to get pressure on Young without letting him out of the pocket. Young added 40 rushing yards and a rushing touchdown in the SEC title game.

Bennett replaced the oft-injured J.T. Daniels as the starter after the fourth week and showed impressive efficiency early in the year. After a solid regular season, the former walk-on received some scrutiny following the loss in the SEC title game. Bennett threw for 340 yards and three touchdowns against the Tide, but he had two interceptions – one pick-6 that proved costly.

Bennett bounced back and had one of his best games in a Bulldogs uniform against Michigan. He threw for 313 yards and three touchdowns against a Wolverines’ defense that only allowed an average of 196.1 passing yards this season. Bennett showed accuracy and smart decision-making in the win on New Year's Day. The Bulldogs know their QB cannot turn the ball over if they want to hoist the trophy on Jan. 10.

Georgia must identify Anderson and keep him away from the pocket if they want Bennett to have a successful day. Anderson who has made his name by being in opponents' backfields, leads the nation in tackles for loss with 34.5 and sacks with 17.5. If Anderson proves to be the best defensive player on either team and continues his disruptive ways in Georgia’s backfield then Alabama has a great chance to repeat as champions.

Robinson Jr. was dealing with a lower leg injury the last time these teams played. The extra time off before the Goodyear Cotton Bowl Classic allowed Robinson to get healthy, which proved to be exactly what the Crimson Tide needed. Robinson who only rushed for 55 yards on 16 carries in the SEC title game, ran for a career-high 204 yards on 26 carries in the semifinal matchup with Cinncinatti.

The fifth-year senior has stuck around Alabama so he could have his chance to shine – and now is that chance. If Robinson proves to be more effective against the Bulldogs this time around then more passing lanes will open up for Young – making the Crimson Tide’s offense nearly impossible to stop.

The 6-foot-4, 230-pound freshman is a matchup nightmare for any defense, even one as talented as Alabama’s. He led Georgia with 10 catches for 139 yards and a touchdown in the SEC championship. Bowers was the only receiver who had more than 50 yards in that game.

The Bulldogs know they need to do a better job getting other pass catchers involved. Against Michigan, Georgia had four different players with at least 50 yards of offense. Even so, Bowers is the key playmaker for the Bulldogs’ offense, and he will be leaned on for third downs and in the red zone.

The Georgia secondary is not the strength of the defense but the DBs will need to step up and make some key plays. The secondary’s main focus will be to make it tough on Bryce Young by bringing down his receivers as soon as they catch the ball – limiting their YAC (yards after the catch). One DB looking to carry some momentum from the semifinals is Derion Kendrick, a Clemson transfer, who had two interceptions against Michigan. Kendrick and others will need to create some turnovers and positively impact the game for their team to win.

It’s hard to imagine a world where I would bet against Saban and the Tide while they are receiving points. Alabama has only been underdogs three times out of 181 games since 2009. The Tide won those games by 19, 28, and 17 points. The most recent was the SEC title game a little over a month ago. Saban is known to do a great job using whatever little added motivation he can to get his players to play better.

On paper, the Bulldogs should win the battle in the trenches which gives them the advantage to win the game. But will Bennett be able to provide the type of game the Bulldogs will need to keep up with Young and the Tide’s offense? My thought is Georgia could win by a small margin, but Alabama could run away with this game as they did in the SEC championship.