By Steve Tsilimos | Posted 25 days ago 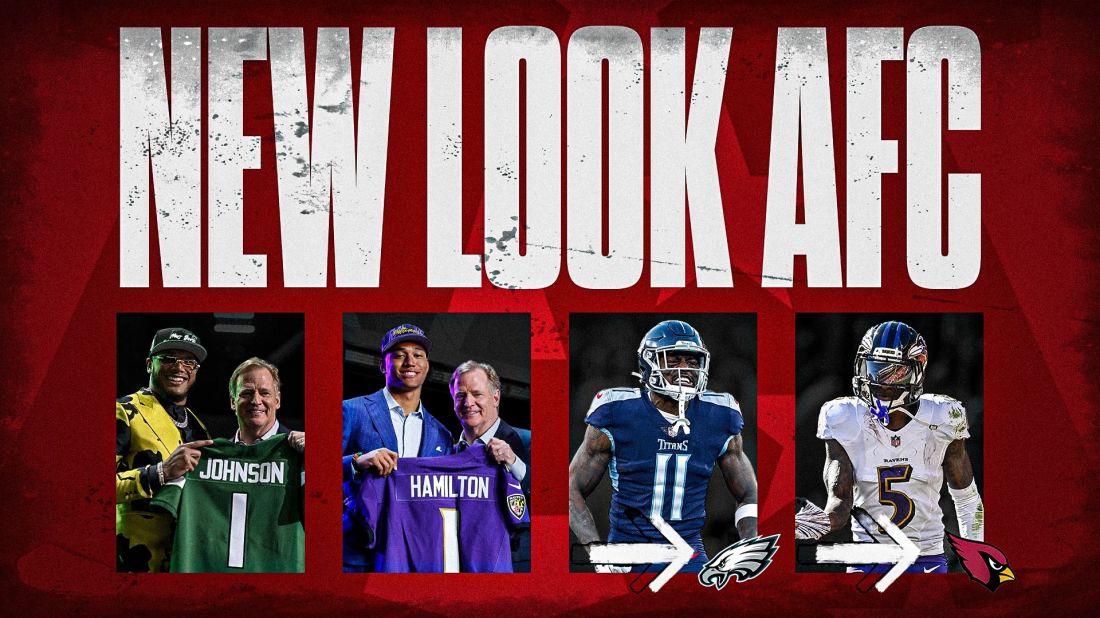 The 2022 NFL Draft did not have a sure-fire star QB or a can’t-miss prospect like most years, but it had more excitement than in years past. The middle of the first round had teams trading star players and moving around the board at a pace that was hard to keep up.

The draft always has a lot of uncertainty surrounding it which is what makes it so much fun. The teams are gambling on players – and just like a bet, when they get it right it’s “we knew we had our guy” but when they miss it sounds more like, “how did this happen?”

I am not a teacher so I will not be handing out draft grades like most other analysts. Instead, I will place the AFC teams into three categories:

Let’s start with the good and work our way to the ugly. One thing I value higher than most other analysts is using picks on WRs instead of trading picks and paying the position huge money. It has been proven over the past five years that receivers on rookie contracts can provide huge numbers or at least be solid contributors. There is a receiver bubble happening and the teams that are letting their star receivers go are ahead of the bubble and will be rewarded in this piece.

New York needed to draft the best available player because the Jets need talent everywhere. They did a great job at using their first four picks on players who should be able to start this season. CB Sauce Gardner and WR Garrett Wilson were the top-ranked guys at their position and have the skills to be All-Pros sooner rather than later. The Jets moved back into the first round to take DE Jermaine Johnson II who had fallen further than most people thought. Then in the second round, the Jets again took a top-ranked guy at a position when they took the first RB in the draft Breece Hall. If Zach Wilson takes a big step in development then the Jets could be looking at this class as the one who turned them around.

The Ravens are a good example of a team that shipped away their best receiver to get more draft capital. Baltimore sent Marquise Brown and a third-round pick to the Cardinals for the No. 23 pick. They eventually moved back two more spots and gained a fourth-round pick,which gave them six total picks in the round (most in a single draft since 1970). The Ravens did a great job at finding value on all three days. They snagged the top safety Kyle Hamilton and top center Tyler Linderbaum in the draft and found some more starters on the offensive and defensive lines with their first five picks. The only knock on the Ravens is that they did not draft any receivers which is a huge need for them right now.

The Bills are who traded with the Ravens to move up two spots to take CB Kaiir Elam in the first round. Elam should be a starter from day one. The Bills then filled another roster need in the second round by taking the third RB in the draft James Cook – who should provide some big plays in this offense. And again, the Bills addressed their needs with their third-round selection. LB Terrel Bernard may have been a bit of a reach at that spot but the Bills did well in getting their guys.

The Super Bowl runner-up did not mess around and stuck with the plan to fill the holes on the roster. The Bengals had needs on both lines and they drafted two defensive and one offensive lineman. Their other picks were filling out their secondary which was a huge weakness last season. DB Daxton Hill can play pretty much any position in the secondary, which gives the Bengals flexibility when they are trying to find the best guys to have on the field.

The Chiefs have been under scrutiny after trading Tyreek Hill to the Dolphins, but this draft could help cool the critics. Kansas City filled their needs with their first three picks and found a guy very similar to Hill when they drafted one of the fastest WR in the draft Skyy Moore. The Chiefs also did great in the later rounds by getting players who could develop into starters.

The Steelers took the first QB off the board and one of the last when they took Kenny Pickett in the first and Chris Oladokun in the seventh. Pickett had 50 starts in college and is a type of QB that could start day one and be the perfect game manager for the Steelers. Oladokun is a raw talent but he could eventually become a starter. Steelers’ head coach Mike Tomlin got what he wanted – QBs to compete with Mitch Trubisky for the job. The Steelers understand the WR bubble and let Juju Smith-Schuster and James Washinton go in free agency, and did a nice job filling the vacancy at WR by picking George Pickensand Calvin Austin III.

The Texans had an extra first-round pick in this draft and in the next two drafts by trading a QB that didn’t even want to be there. If they can hit on at least one of those added picks they made out like bandits. The Texans could have gone in many different directions because they were after the best player available rather than trying to fill certain holes. They did well in finding as much value as possible while adding players who should be able to step in and make a difference.

The Titans traded All-Pro WR A.J. Brown to the Eagles on the first day of the draft. They selected his replacement Treylon Burks with the No. 18 pick that they acquired in the trade. I think the Titans did the right thing. Burks will not be Brown in 2022 but it’s totally possible that Burks ends up being better than Brown and they will not have to pay him for a few years. The Titans filled their roster needs with their next two picks by getting a CB and OT. The Titans then took QB Malik Willis in the third round, which could be a steal if he develops into a franchise QB to take over the position after Ryan Tannehill.

The Colts did not get to participate on day one because of the ill-fated Carson Wentz trade. That did not stop Indianapolis from having a solid draft. WR Alec Pierce and TE Jelani Woods both have good size and could become great targets for QB Matt Ryan. OT Bernhard Raimann was a steal at No. 77 and could start this year. S Nick Cross can cover the slot and will most likely find the field this year on defense. Would have been nice to see the Colts get a QB, but they seem to like guys at the end of their careers.

The Browns had a lot of picks but none in the first two rounds – due to the Deshaun Watson trade. The Browns filled their needs with their late-round picks adding two WRs and two DEs. WR David Bell fell to the Browns at No. 99 because he ran a 4.65-second 40, but he should be a solid option for Watson. K Cade York has a big leg and could become a key piece to the Browns' special teams.

The Broncos sent their first- and second-round picks to Seattle for Russell Wilson, which I believe is well worth it, especially in a draft with no standout QBs. Also in the trade, they sent away TE Noah Fant, which left a huge void in the position, that they filled when they drafted TE Greg Dulcich. DE Nick Bonitto and CB Damarri Mathis. Both have a chance to start next season. All in all the Broncos left the draft with a proven QB and filled most of their roster needs. Denver will still need to find a veteran OT this offseason.

The Chargers traded their second-round pick for Khalil Mack – a former Defensive Player of the Year – which is well worth the value. They then solidified the interior of their offensive line when they selected OL Zion Johnson in the first round. It is hard to love this pick when they could have used it to get an OT. RB Isaiah Spiller has a nice combo of size and speed and could make some impact plays for this offense. The Bolts did not draft an LB or an OT which means they need to find some veteran help soon.

The Raiders did not get that much out of this draft because they traded their first- and second-round picks to acquire WR Davante Adams from the Packers. The front office did do well with what they had though. G/C Dylan Parham could be a starter that they found in the third round. They got two different DTs that could contribute this year when they drafted Neil Fareell Jr. and Matthew Butler. The two RB choices could be some evidence that Josh Jacobs may be in a new uniform soon.

The Jaguars continually find themselves at the top of drafts because they continually fail to succeed at drafting. For a team that needs so much help to take DE Travon Walker, who is not a sure-fire thing, instead of moving back and acquiring more picks seemed silly. The Jags moved back into the first round to take LB Devin Lloyd which was a nice pick. Then they took another ILB 40 picks later which seemed odd.

The Dolphins traded their first-, second-, and fourth-round picks in this year's draft plus two late-round picks in 2023 to acquire WR Tyreek Hill. Hill is arguably worth it because of his game-breaking ability, but I am sticking with my sentiment that sending away picks and paying big money for a WR is not smart. The Dolphins did well when they landed LB Channing Tindall late in the third round. Tindall did not start for Georgia but he played a lot of meaningful minutes and is very underrated.

It is hard to put New England last on my list because that means I am questioning the front office and coach who dominated the last 20 years. The Patriots have always seemed to value players differently and are usually right. But at first glance, they seemed to reach for their first two picks G Cole Strange and WR Tyquan Thornton. The Patriots then used two picks to add two corners who could compete to start which was the best part of their draft. Adding two RBs to their stable of young running backs seemed a bit odd as well.