By Kevin Kernan | Posted 16 days ago 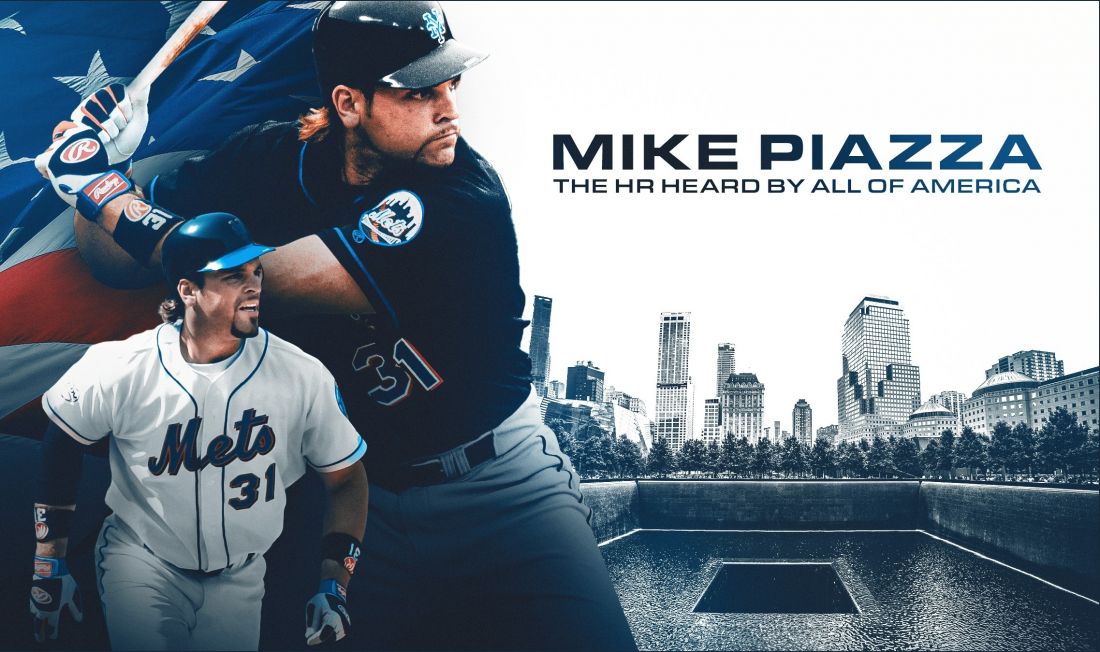 His eyes were filled with tears during the National Anthem. Then came his prayers.

Twenty years after 9-11 and hitting the home run for New York City, the home run for America on Sept. 21, 2001, at Shea Stadium, Mike Piazza is still processing what that home run means for him and so many others.

“I try to be faithful,’’ Piazza told OSDB from his home in Italy, “and I think those are the moments where I was really able to relax and I just remember being on the line for the National Anthem and I said, ‘Lord, please, just help me get through this night.’ ’’

That was Mike Piazza’s simple yet powerful prayer.

“It was ironic that I said I didn’t want to do anything bad, and that I ended up making an error that put them ahead, I think I bobbled the ball,’’ Piazza said of a throw home that got away in the fourth inning as the Braves’ Chipper Jones scored the first run of the game. “So, it was kind of ironic that I went from the goat to actually hitting the go-ahead home run.

“It was kind of a microcosm of my career in one night, it was pretty interesting.’’

Faith was the word of the night.

This was the first game, the first sporting event in New York City after that terrible day when 2,977 people lost their lives to terrorists acts that included two planes flying into the Twin Towers and another flying into the Pentagon. On UA Flight 93, passengers took matters into their own hands, their plane crashed in Shanksville, Pa., when they fought back against the hijackers, stopping another brutal attack.

Through all that pain, sadness and death, faith is what has to carry us.

Piazza told me this observation regarding that home run, one of 427 he hit over his 16-year Hall of Fame career.

“It’s really special for me, of course I get asked about it a lot and I try to give everyone a heartfelt answer. When people are engaged about it, I really try to answer their questions,” he said. ““When they say, ‘What were you thinking?’ I say, ‘I really wasn’t thinking. I was blessed that I was a man of faith and I prayed for strength and I was in the right place at the right time and I felt the energy from the people.’

“After that I was just kind of a blank. I just call it faith. Just strength from God.’’

Strength to hit Steve Karsay’s fastball 430 feet over the centerfield wall and into the night for a two-run home run to give the Mets the lead in the eighth inning of the 3-2 victory over Atlanta before 41,235 flag-waving fans, who erupted into cheers and gave Piazza a curtain call.

“It’s bittersweet,’’ Piazza admitted.  “It’s very prudent and very appropriate that we continue to remember and memorialize the tragedy of the events of 9-11. We continue to learn from it in a good way but it’s also difficult.’’

With so many documentaries on this 20th anniversary, Piazza explained why this is a difficult time. “It’s so hard in a way, so hard to go back and watch those things,’’ he said.

It really is. And to see those towers fall again on your big screen can take a toll.

“I don’t actively suppress it, it’s still something I think about nearly every day but it is difficult in a way, you still have scar tissue from that,’’ Piazza said. “It’s a little overwhelming for me. I always try to treat it with reverence. At times, I’m uncomfortable when I talk about it. I just do the best I can but I feel that people do want to talk about it so I kind of owe them that.’’

That home run lifted the spirits of a city and a nation. At that moment, people realized they could cheer again. Life would go on. We needed to persevere.

Piazza will fly to New York to be at Saturday’s Subway Series game at Citi Field as the 20th anniversary is commemorated by the Mets and Yankees.

“I think it’s the right thing to do,’’ said Piazza, who was just in New York celebrating Jerry Koosman’s jersey retirement ceremony at Citi Field, but returned to Italy to help prepare Team Italy for the European Championships that begin next week. He is the manager of the club.

Piazza and his wife Alicia and their three children Nicoletta, Paulina and Marco live in both Italy and the United States.

“I think it’s real important that we continue to teach the next generations, our younger generation wasn’t there for that tragedy,’’ Piazza said. “I think we can do it justice by continuing to educate.’’

That is such a great point. The events of that day need to be examined and never forgotten by future generations. That is our duty as a country.

Piazza said there remains “overwhelming sadness, but there’s also the bravery and courage and everything positive that does come out of such a tragedy.’’

The stories of those who died that day and as a result of the attacks and those who rushed in to help must be forever honored.

At the time of the home run, Piazza did not realize the impact the home run would continue to have for decades.

“Because I think that whole week, all the negative news, and it does start to weigh you down emotionally. It takes its toll. From that perspective for us, it was really good.

“After the game I didn’t preserve the bat, I didn’t really think it was going to have impact that it did, I didn’t think people would reflect on it as much as they did and hold it in such a good place as they did. And I think that’s a good thing.’’

His 9-21 home run jersey was sold by the Mets to a local collector years ago and in 2016 I broke the news that Anthony Scaramucci, along with Tony Lauto and a third anonymous partner purchased the jersey so it could be seen by the public in a rotating fashion at the 9-11 Memorial and Museum, Citi Field and the National Baseball Hall of Fame and Museum

At the time Scaramucci told me, “We had too many friends die in those buildings to let that jersey go anywhere else. Tony and I wanted to make sure that jersey stays in New York. Mike is happy. Vince (Piazza) is happy.’’

The jersey is home and Piazza with that home run, forever have his place in 9-11 history.

“I can’t explain what an honor it is for me for people to continue to call that home run and reflect on that as a really special event and it will be with me forever, even when I’m gone,’’ said Piazza, who turned 53 last week. “It’s on my Hall of Fame plaque so having hit a few home runs, to be remembered for that home run, definitely, I’ll take it. It’s a nice thing.’’

A nice thing that happened during a terrible time and that is why so many people gravitate to Piazza’s home run.

“You hear things, from people who maybe aren’t the biggest baseball fans and how much they reflect upon it and hold it in a good light,’’ Piazza said in an uplifting voice. “It’s an honor. It’s something that I don’t take lightly but at times it makes me a little uncomfortable, if that makes sense.’’

Allowing people to find joy in such a dark time and even here we are 20 years later and the home run brings a smile to people’s faces in one of the most difficult times in American history, the impact of that home run, that moment cannot be oversold.

“I think it’s something for me, even though I hit the home run, I think of it as something like, ‘That’s my job and what I’m paid to do,’ ’’ Piazza explained. “To be in the right place at the right time and hopefully come through more times than not but also it’s nice that it has taken on a different meaning than just a game that would be a significant home run that would put us ahead.’’

With those memories come deep reflection.

“I think we still feel the presence of those that we lost in a way,’’ Piazza said. “I’ve heard that from different people. It was such an event that we had never really experienced on American soil. We’ve had attacks, Pearl Harbor, the War of 1812, we’ve had battles on our soil, but nothing up until that time this century we had not experienced. You can’t really relate.

“When you see foreign wars, and terrorism and pain, you kind of say, ‘Well, that’s happening over there’ You don’t have it first-hand. That was another thing that made it so painful was that we really hadn’t experienced that in our own country so it was much more of a shock. I think that is what added to the pain, the frustration, the suffering, the spectrum of emotions that we all went through and still do to a certain extent.’’

Indeed and recently America lost those 13 service members in Afghanistan.

“It’s a shame,’’ Piazza said. “We appreciate so much what they do and the sacrifices that they make, months and months away from the family. Unfortunately, politicians make the decision to put these guys and girls in harm’s way. They have a unique responsibility to protect them. You just wouldn’t expect 20 years later that there would be interconnected issues dealing with terrorism. But we have to deal with it and we still are dealing with it. The military and Seal Teams, I got to meet them in San Diego when I was there in 2006, they are such special people.