Page: 12 athletes who are must follows on social media platforms

12 athletes who are must follows on social media platforms

By Cameron Dasilva | Posted 1 year ago 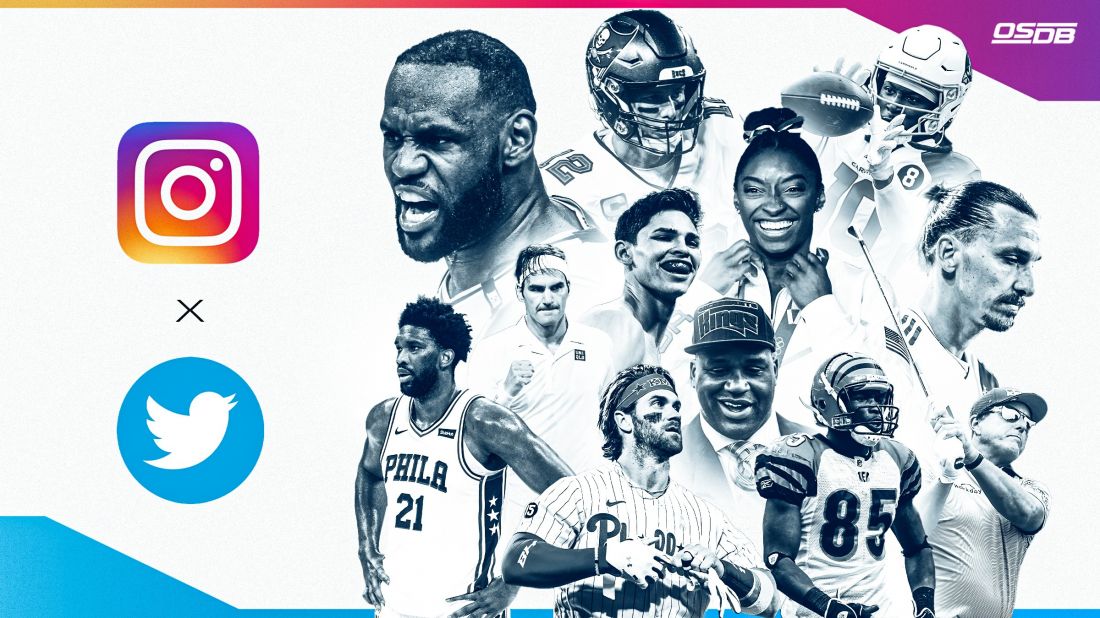 Social media has connected athletes and fans in a way that brings the two closer than before. Fans can follow their favorite players on Twitter, Instagram, TikTok and Twitch to see what they’re up to when they’re not performing on their respective stages.

Some athletes have grown their social media presence more than others, and some are better follows than the rest. We’ve highlighted 12 athletes who are among the best to follow on social media.

Hopkins is a player who’s both funny and inspirational on social media. Whether it’s a highlight of his miraculous catch on Kyler Murray’s Hail Mary last season against the Bills or a meme after the Cardinals reloaded their roster this offseason, the wide receiver is worth following on both Instagram and Twitter.

What might be his best post yet was a TikTok slideshow of photos he took from Cardinals training camp using a disposable camera. No one will regret hitting the “follow” button on any of Hopkins’ social media accounts.

OK, so there’s more to LeBron’s social media activity than what he’s eating on Tuesdays, particularly when it comes to all that he does in the community. He’s seemingly always helping others through some sort of charity, combating the hunger crisis and setting up kids for success through his I Promise School.

James is one of the most recognizable (and followed) athletes of this generation and it’s no wonder he has almost 100 million people following him on Instagram.

Brady wasn’t all that active on social media while with the Patriots, but that’s changed with the Buccaneers. He’s become one of the best athletes on Twitter and Instagram as a member of the Super Bowl champion Buccaneers. He finds subtle ways to troll the Falcons over their blown 28-3 lead all these years later, while also posting funny -- yet clearly altered -- videos of himself doing unrealistic things on the football field (and golf course).

Brady is 44 years old but based on the content he posts on social media you’d think he was 25.

Ibrahimovic may not be the most well-known athlete to American fans, but the legendary Swedish striker is as highly entertaining on social media as he is on the pitch. Although he doesn’t have the followers that Cristiano Ronaldo does, Ibrahimovic offers his supporters a behind-the-scenes look at his daily life, from biking to hanging out with other soccer stars. His highlights are always worth watching, too, and he shares those from time to time.

Johnson was among the top wide receivers during his playing days with the Bengals, making the Pro Bowl six times and topping 1,000 yards in seven of his 10 seasons in Cincinnati. Although he hasn’t played since 2011, he’s become a great person to follow on social media.

He’s responsive with fans on Twitter and is never afraid to share his opinion on a topic, but he’s also regularly sharing his random acts of kindness by posting receipts with massive tips that he leaves at restaurants  -- no matter how small the bill was. Following Johnson will make you feel better on almost a daily basis.

Flight to Miami is packed, i will be doing the safety demonstration & doing karaoke once we reach cruising altitude.

You don’t need to look beyond Embiid’s name on Twitter to know he’s worth following. He changed his name last year to Joel “Troel” Embiid on social media, since he’s known for trolling and creating a stir among fans with his tweets and comments in the media.

The friendly giant is funny and entertaining online, but he’s also honest with his followers and fans. That’s refreshing to see, given his platform of nearly 2 million followers on Twitter....Sometimes he even tries to shoot his shot.

Babe are you single or nah? @rihanna

He’s not actually going to help you hit it further off the tee, but Mickelson will give you a good laugh every now and then. Similar to Brady, the 51-year-old six-time major champion has turned back the clock on social media and embraced his digital presence.He’s not afraid to call out doubters on Twitter, either, so if you come at the king, you best not miss or he will respond and let you know you’re wrong.

Federer is an icon in the tennis world and he’s often open to sharing a peek behind the curtain of his everyday life both on and off the court. With all the places tennis takes him, he posts photos of his travels and lets fans see what he’s up to when heading to a tournament. He’s especially fond of his home country of Switzerland, often uploading photos of the spectacular views that he comes across.

Phillies RF Bryce HarperHarper is no longer active on Twitter, but his Instagram account makes up for it. If you like custom cleats, Harper is always showing his off online -- and they’re often awesome. He shares highlights on the field, as well as photos with fans and his son.

Harper has been one of the best players in baseball since making it to the big leagues in 2012, so it’s no wonder he’s amassed nearly 2 million followers on social.

There may not be an athlete with a wider array of social media posts and activity than Shaq. The NBA on TNT host and Hall of Famer posts everything from funny commercials he stars in, to rankings of NBA players, and just about anything else you can think of that O’Neal does on a daily basis.

What’s better than Shaq flapping a cardboard set of wings with money taped to it?

Biles is one of the most well-known gymnasts in the world, collecting seven Olympic medals in her career -- including four gold medals. But beyond that, she’s an advocate for mental health, opening up about the importance of it during the 2020 Tokyo Olympics. She’s an athlete that fans can learn from by following her on social media, which is why she has as many followers as she does.

Garcia isn’t a household name when it comes to professional boxing, but he’s making his way up the ranks. What he is known for are his viral videos on the speed bag and doing other drills.

His hands are as fast as anyone’s, packing a ton of power in his punches. He boasts a 21-0 record as a pro and has 8.8 million followers on Instagram. One glance at his profile makes it clear why he has so many fans.